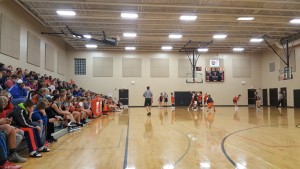 The Dell Rapids girls and boys basketball teams joined together to host the first “Friday Frenzy” fundraising event at the Dell Rapids Middle School to kickoff the 2016-2017 basketball season.  Spectators were encouraged to bring two items that could be donated to the Dell Rapids Food Pantry.  The Quarriers were able to collect over 15 boxes of donated items to give to the Storehouse.

The evening’s events included an introduction of all the high school players for both the girls and boys teams, a “hype” video for the year, short scrimmages, a skills competition, a three-point shooting contest, and a dunk contest.  The senior team of Averi Pankonen and Austin Ellingson won the skills 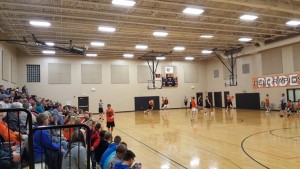 competition.  Carson Rentz was the boys’ and overall three-point champion, hitting more than 20 three-pointers in each round.  Emma Paul was the girls’ three-point champion.  Sheldon Siemonsma won the dunk contest in a great battle against Mason Schmidt.  Siemonsma’s won the contest with a dunk over three teammates.