The 10U team opened their tournament on Friday with two wins.  They defeated Worthing 10-0 and then beat Flandreau 11-0.  Dell Rapids received a bye in the first round of the championship bracket as the #1 seed via a coinflip with West Central, which gave Dell Rapids the day off on Saturday.  Dell Rapids fell to Lennox 9-4 in the semifinals on Sunday, and then lost to Flandreau 10-8 in the third place game. 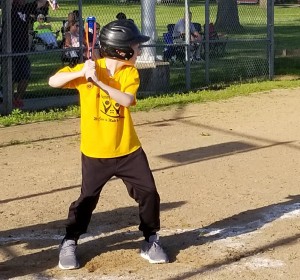 Inspirational, courageous, heroic….these are just some of the words that describe Derek Gerlach.

All of that strength and fight has led to some recent big wins.  Derek was able to participate in a couple of baseball practice drills in May with his team.  A recent MRI scan came back clean.  And on Wednesday, June 5th, Derek inspired everyone by playing in his first baseball game of the season.

With leg braces in place, ball pants and jersey just right, Derek stepped out onto the field and played first base.  He was able to be a part of three plays that night and step into the batters box for an at-bat.

The fight continues for Derek with more rounds of chemotherapy to keep the MRI results coming back clean, but for one evening, Derek was a normal 11-year-old boy playing the sport he loves.  That night he showed us it’s not about always making the play or getting the big hit, but it’s the attitude, determination, courage, and fight you bring to what you do.  On this night on the baseball field, Derek certainly inspired his teammates, coaches, and parents to always keep fighting.

To help support Derek’s fight, donations can be made to his Go Fund Me page found here, https://www.gofundme.com/help-derek-fight/.

The Dell Rapids 10U and 12U baseball teams had their league season come to an end in the MinnDak “End of the Year” tournaments on Friday, July 6th through Sunday, July 8th.  Six 10U teams and four 12U teams competed in this year’s tournaments held in Baltic, Garretson, Hills, MN, and Beaver Creek, MN.

The MinnDak League is made up of teams from Baltic, Crooks/Colton, Dell Rapids, Flandreau, Garretson, Humboldt/Hartford, Hills/Beaver Creek, MN, and Sioux Falls.  The teams compete in a 12-game regular season from mid May until the end of June.  Teams are then split evenly into three different levels of tournaments.  In 2018 there were a total of 17 teams that played in the 12U division and 25 teams that played in the 10U division.

A Dell Rapids 10U travel baseball team won the the South Dakota State VFW 10U Class A State tournament held in Humboldt July 14th – 16th.  The team went undefeated throughout the weekend tournament.

Dell Rapids played two games on Friday, July 14th, to start the tournament.  They defeated Tea 11-2, and then they beat Winner by a score of 18-1.  Lennox was their next opponent on Saturday, July 15th.  Dell Rapids earned an 11-8 victory to give them a 3-0 record heading into the semifinals.  In the semifinal round held Sunday, July 16th, Dell Rapids beat West Central 10-0 to advance to the championship game.  Dell Rapids then defeated Madison 14-4 to bring home the title.

The team had a .600 batting average for the entire tournament.  Millage led the team going 11-14 with 11 runs scored.  Brandon Nyman was 12-16 with six runs scored.  Fersdahl finished 11-15 while scoring 12 runs.  Carr was also 11-15, one of those hits a home run, with five runs scored.  Frost was 10-16, and he also had a home run and scored seven times.  Grady Lamer was 10-17 with seven runs scored.  Ruesink finished 7-14 with eight runs scored.  Ethan Vanderwerf had five hits with three runs.  Carson Crosby had four hits, and Matthew Nelson collected three hits in the tournament. 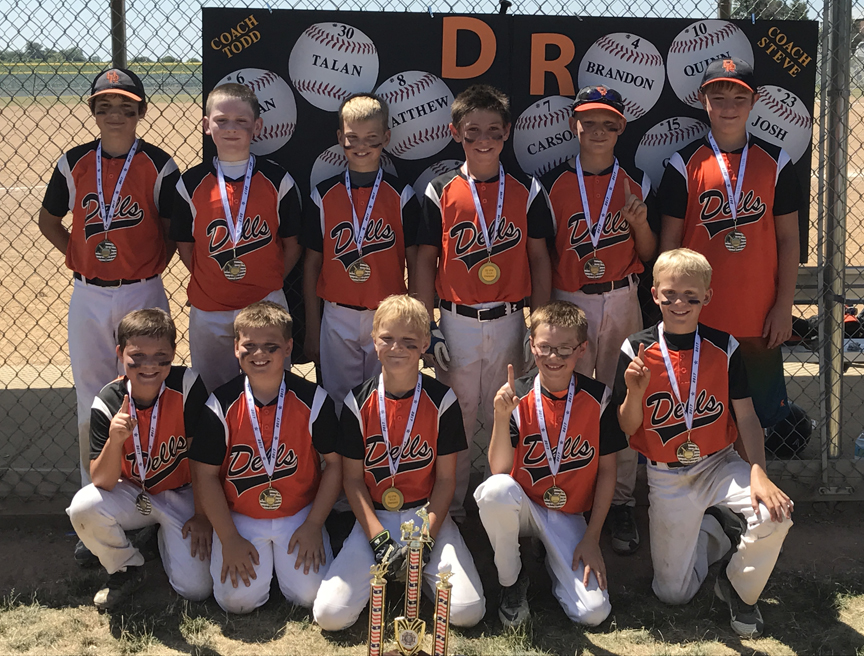 Dell Rapids youth baseball had one Midget team play in the Gold Bracket and two teams play in the Silver Bracket.  Dell Rapids Jody’s Collision played their way to a second place finish in Humboldt.

The Dell Rapids NSS 12U team finished second at the 2014 12U VFW State Tournament held in Humboldt Friday, July 18th, through Sunday, July 20th.  The tournament had 16 teams from Dell Rapids, Humboldt, Madison, Tea, Vermillion, Volga, Chamberlain, Custer, Groton, Milbank, Lennox, Parkston, and Elk Point-Jefferson.  The teams were put into four pools of four teams each.  The winner of each pool played for the championship on Sunday.

Dell Rapids NSS won all three of their pool-play games.  They defeated West Central 11s by a score of 11-6, Milbank 9-8, and Lennox 12-0 to advance to the championship round on Sunday. 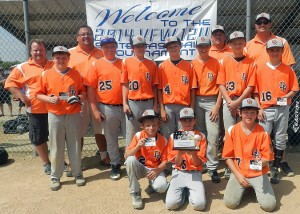 The Dell Rapids Devils 11U team also participated in the state tournament, playing hard-fought games against Tea, Volga and Chamberlain.

Three youth baseball teams played in Yankton on Saturday, May 10th, and Sunday, May 11th.

The 10U team ended their tournament on Saturday winning two of three games.  They won their first game against Hinton, Iowa 12-6.  They followed that with a win over the Yankton Hurricanes 12-0.  In their final game, they lost to Flandreau 9-7.

The Dell Rapids Devils played in the 11U bracket on Saturday.  In their first game against the Dakota Thunder, the Devils fell behind 10-0 before rallying.  Time ran out for the Devils as they fell 12-9.  In the second game, the Devils fell to the Crooks Stangs 11-6.  The Devils ended their day with a loss to the Yankton Bucks 14-2.

The Dell Rapids NSS team played in the 12U bracket on Sunday.  They lost their first game to the Yankton Twins 4-1.  NSS won their second game against Parkston 5-3.  Dell Rapids dropped their third game of the day to West Central 5-4.