Inspirational, courageous, heroic….these are just some of the words that describe Derek Gerlach.

All of that strength and fight has led to some recent big wins.  Derek was able to participate in a couple of baseball practice drills in May with his team.  A recent MRI scan came back clean.  And on Wednesday, June 5th, Derek inspired everyone by playing in his first baseball game of the season.

With leg braces in place, ball pants and jersey just right, Derek stepped out onto the field and played first base.  He was able to be a part of three plays that night and step into the batters box for an at-bat.

The fight continues for Derek with more rounds of chemotherapy to keep the MRI results coming back clean, but for one evening, Derek was a normal 11-year-old boy playing the sport he loves.  That night he showed us it’s not about always making the play or getting the big hit, but it’s the attitude, determination, courage, and fight you bring to what you do.  On this night on the baseball field, Derek certainly inspired his teammates, coaches, and parents to always keep fighting.

To help support Derek’s fight, donations can be made to his Go Fund Me page found here, https://www.gofundme.com/help-derek-fight/. 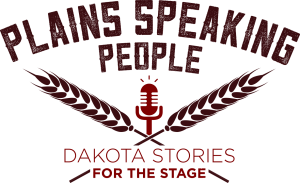 A benefit fundraiser for 10 year old Derek Gerlach, who was recently diagnosed with brain cancer, will be held Friday, January 25th, in Flandreau. The Crystal Theater will host a performance of “Plains Speaking People, Dakota Stories For the Stage”. Music from the amazing Will Prines will begin at 7pm, and the story tellers will hit the stage at 7:30pm. A free will donation of $10 per person is suggested. All money will go directly to Derek’s family.

“Plains Speaking People” features eight individuals sharing a chapter of their life. The tales can range from heartbreaking to inspirational to hilarious. Each story only takes 10 minutes. Some of the speakers you may be familiar with, and some you may not.

In addition, a raffle for a couple of homemade quilts and some other items will be held.

Derek is the son of Shane and Donelle Gerlach. They currently live in Dell Rapids. Shane is a Flandreau native.

For more information, go to plainsspeakingpeople.com. There is also a Go Fund Me page to help the family if you are unable to attend. 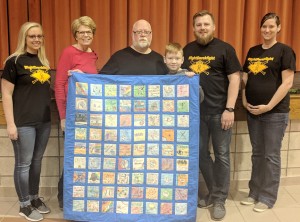 “Fight Derek Fight” is a phrase that can be seen and heard throughout our small community.  Derek Gerlach, a fifth grader at Dell Rapids Middle School, is undergoing the fight of his life.

Derek was diagnosed with a brain tumor on November 6th, 2018.  The following day Derek underwent surgery to remove a tumor from the base of his skull.  Derek has been diagnosed with Medulloblastoma.

According to Wikipedia.org, Medulloblastoma is the most common type of pediatric malignant primary brain tumor (cancer), originating in the part of the brain that is towards the back and bottom, on the floor of the skull, in the cerebellum, or posterior fossa.

On Monday, December 3rd, Derek started his six week radiation therapy at the Mayo Clinic of Rochester, Minnesota.   Derek is looking at a minimum of a year of chemotherapy treatment to battle his cancer.

On Friday, November 30th, before Derek’s departure for the Mayo Clinic, his classmates had a heart-felt surprise for him.  The fifth grade class presented Derek with a homemade quilt for his journey and time away from them.  Each fifth grade student designed a square to be placed on the quilt.  Tanna Swanson, retired fifth grade math teacher (who now steps in as a substitute teacher) was able to bring the creation to life.  Thanks to many hours of sewing, Derek was able to have his quilt before he left for the treatment ahead of him.  “I am so amazed at the maturity and support that the Dell Rapids fifth graders have shown through this with Derek,” Shane Gerlach said.

Due to the amount of appointments the first week in Rochester, both of Derek’s parents, Shane and Donelle will be staying with him.  After the first week, Shane and Donelle will rotate time spent with Derek in Rochester and their home in Dell Rapids.  “Christmas Eve, Christmas Day, New Year’s Eve and New Year’s day will all be spent in Rochester,” Shane Gerlach stated.   “But we’ll be together. That is all that matters. I don’t care where we spend the holiday, we’ll at least be with each other.”

To help Derek and his family, you can donate at any Wells Fargo to the Derek Gerlach Charity Fund, the Help Derek Fight Go Fund Me website, purchase a #fightderekfight bracelet or window decal and most importantly, prayers for Derek.