Weston Mason had a sixth place finish in the 160-pound weight class.  Mason had an opening round win by technical fall (15-0).  Barrett Schneck of Milbank pinned Mason in thee quarterfinal round.  Mason bounced back with a major decision win (14-3) and a 7-5 decision win in his next two matches.  In the consolation semifinals, Tyson Brand of Brookings beat Mason by a 2-1 decision.  Mason was then pinned in the 5th/6th match.

Rylee Bird had an eighth place finish in the G-126 division.  Bird lost her opening round match, but picked up two pins in a row in the first two rounds of the consolation bracket.  Bird was then pinned in her next two matches to finish eighth.

The Dell Rapids Quarrier boys wrestling team had three state qualifiers from the Region 1A tournament held at O’Gorman High School on Saturday, February 19th.  The top four places in each weight class qualify for the state tournament.

The Dell Rapids Quarrier girls wrestling team participated in the Harrisburg Girls Tournament on Saturday, February 12th.  Dell Rapids finished with a total of 16.0 points as a team.

Rylee Bird placed seventh in G126 with a 3-2 record, and all three wins via a pin.  Janessa Nelson was also seventh in the G145 division with a 1-2 record.  Nelson’s win was a pin.  Bailey Credeur placed eighth in G132 with a 2-4 record.  Credeur earned one pin and one decision victory.  Mikayla Hight placed eighth in G145 finishing 0-3 in matches and receiving two byes.

The Dell Rapids Quarrier wrestling team had their final regular season tournament on Saturday, February 12th.  Dell Rapids traveled to Huron and finished ninth as a team with 92.5 points.  Winner was the top team with 231.0 points.  Aberdeen Central was second with 191.0 points, and Bon Homme/Scotland was third with 163.0 points.

John Mortrude had a second place finish in the 126-pound class finishing 3-1 on the day.  Weston Mason (160-pound) and Quinn Carr (182-pound) both had third place finishes also with 3-1 records.  Aiden Geraets finished 2-2 and placed fourth in the 195-pound class.  Hunter Nelson was fifth in the 152-pound division with a 3-2 record.  Brandon Schmidt had one win and placed sixth in the 220-pound class.  Gabe Clark (145-pound) had two wins on the day as well.

The Quarriers will be at O’Gorman High School for the Region 1A Tournament on Saturday, February 19th. 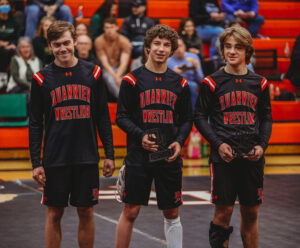 The three seniors, Weston Mason, Hunter Nelson, and Connor Swaney, were recognized and also had a good night on the mats.  Nelson went 3-0 with three pins.  Mason was 2-1 with a pin and a forfeit win.  Swaney also had a pin on the night.

Dell Rapids will travel to Huron for one last regular season tournament on Saturday, February 12th.

The Dell Rapids Quarrier wrestling team traveled to Brookings for the Les Tlustos-Brookings Invitational on Saturday, January 29th.  The Quarriers finished 16th as a team with 33.0 points.

Dell Rapids won’t wrestle again until Tuesday, February 8th in a quadrangular hosted by the Quarriers.

The Dell Rapids Quarrier wrestling team traveled to Tri-Valley High School for a Dak-12 quadrangular on Tuesday, January 25th.  The Quarriers had dual matches against Tri-Valley and West Central.

Mason and Geraets were the two wrestlers that had two wins on the night.

Dell Rapids will be at the Les Tlustos-Brookings Invitational in Brookings on Saturday, January 29th.

Two wrestlers placed in the tournament.  Weston Mason was second in the 160-pound weight class finishing 2-1 for the day.  Quinn Carr had a third place finish in the 182-pound class with a 3-1 record.  Kaiden Lowman had two wins on the day, and Hunter Nelson also earned a win.

Dell Rapids will be at Tri-Valley for a Dak-12 quadrangular on Tuesday, January 25th. 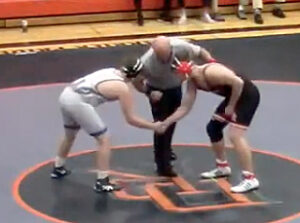 Brandon Schmidt, John Mortrude, and Hunter Nelson all had pins during the night.  Gabe Clark had a win by decision.

The Quarriers will travel to Canton for the Dak-12 Conference Tournament on Saturday, January 22nd.

The Quarriers will host a Dak-12 quadrangular on Tuesday, January 18th.