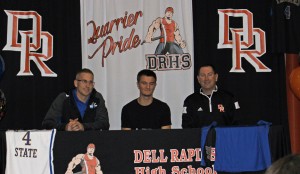 Rentz was also the quarterback of the Quarrier football team this past season.