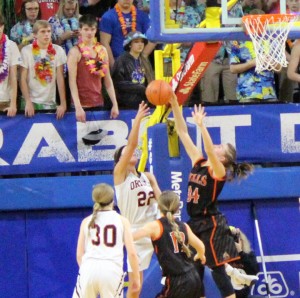 The Dell Rapids Quarriers had to climb out of a double-digit first quarter deficit, only to see the Lennox Orioles pull away in the final minutes for a 63-58 win in the opening round of the 2017 Girls State A Tournament in Brookings over the Quarriers.  The loss snapped a 14-game winning streak.  Lennox was also the last team to beat Dell Rapids.

Lennox had an 8-6 lead early in the first quarter, and then went on 12-2 run for a 20-8 lead late in the first quarter.  The Quarriers were able to cut the lead to 10 points at 23-13 at the end of the first quarter.  The Dell Rapids defense then held Lennox to just 10 second quarter points, while the offense found a little groove.  Dell Rapids was able to cut the to 33-29 by halftime.  The Quarriers brought the defensive intensity into the third quarter and was able to take a three point lead with 1:44 to go in the third quarter, but the third quarter ended with the score tied at 44-44.  With 4:31 to go in the game, Emma Paul put the Quarriers ahead 52-50 on a two-point bucket, but Lennox when on an 8-0 run and led 58-52 late in the game.  Paul knocked down a three point 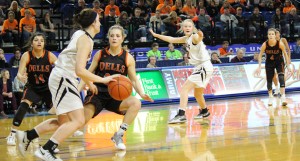 shot with just under a minute to play to cut the lead to 58-55.  After three made Oriole free throws over the next :30, Ravyn Hoffman then made a three-point shot with :35 to go to make it 61-58.  Lennox closed out the game with two more free throws for the win. 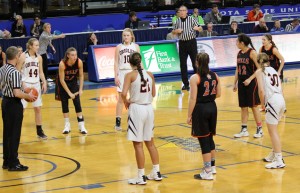