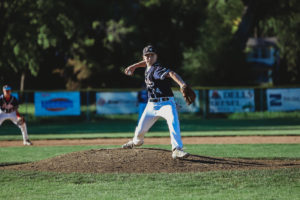 Will Jaton had three hits in the game, while Dylan Mathis had two hits.  CJ Smith and Caleb Kittelson both had a hit in the game as well.

The second road game of the week was in Chancellor on Wednesday, July 8th.  Dell Rapids came home with an 8-1 victory over Chancellor.  After the first three innings went scoreless, Dell Rapids scored four times in the top of the fourth inning.  Chancellor scored a run in the bottom of the fifth, but Dell Rapids added a run in the sixth and three more in the seventh on their way to the win.

Mathis had three hits in the game.  Jaton, Smith, and Joe Rechtenbaugh all had two hits each.  Even Nelson, Josh Deknikker, Landon Ruesink, and Kamren Koster all had one hit each.

Six different Dell Rapids hitters had a hit in the game.  Ruesink, Brayden Pankonen, Jaton, Smith, Deknikker, and Kremer all collected a hit. 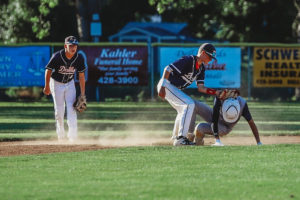 Dell Rapids belted 15 hits in the game.  Mathis and Ruesink each had three hits apiece.  Pankonen, Jaton, and Nelson all had two hits each.  Kittelson, Rechtenbaugh, and Kremer each finished with a hit.

Jaton and Kittelson both had two hits each.  Pankonen, Ruesink, Mathis, Smith, Rechtenbaugh, and Braden Fersdahl all had one hit each.

Dell Rapids held an early 1-0 lead after getting a first-inning run against Volga.  Volga, however, scored the next eight runs and led 8-1 heading into the top of the sixth inning.  Dell Rapids scored two runs in the top of the sixth to cut the lead to 8-3.  Volga added another run in the bottom of the inning to lead 9-3 heading into the final inning.  Dell Rapids scored three times, but the rally came up short.

Brayden Pankonen had two hits in the game. Even Nelsonn, Landon Ruesink, Josh Deknikker, Will Jaton, CJ Smith, and Kade Kremer each had one hit.

Aiden Boechler had three hits in the game.  Deknikker, Jaton, and Smith all had two hits each.  Dylan Mathis, Caleb Kittelson, Austin Harvey, Matthew Goeken, Pankonen, Ruesink, Nelson, and Kremer all finished with hit each.

A return trip to Madison on Wednesday, July 1st was not as kind to Dell Rapids.  Madison Maroon scored two runs in the bottom of the seventh inning to steal a 4-3 win.

Dell Rapids was held to just five hits.  Ruesink had two hits.  Pankonen, Boechler, and Mathis all had one hit each.

Dell Rapids (6-5) will travel to Humboldt to play West Central on Monday, July 8th, and then hit the road again on Wednesday, July 8th to Chancellor.

Playing in their third straight game, the Dell Rapids 15/16 Teeners lost a tough game to the Beresford 16s at Rickeman Field on Wednesday, June 24th.  Beresford avenged an earlier season loss with a 10-3 victory over Dell Rapids.

Mathis finished with a hit and two RBIs.  Brayden Pankonen, Matthew Goeken, and Rechtenbaugh all had a hit in the game.

Dell Rapids will travel to Volga on Friday, June 26th, for their fourth game this week. 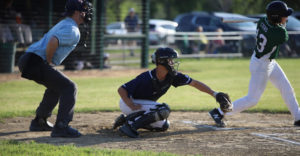 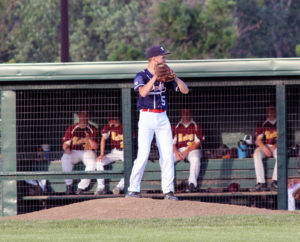 Boechler finished the game with two hits.  Pankonen, Ruesink, Mathis, Smith, and Matthew Goeken all had one hit in the game.

The Dell Rapids 15/16 Teener team played three games in less than 24 hours at Rickeman Field in Dell Rapids.  The boys hosted Chancellor during the evening on Friday, June 12th, and then hosted Vermillion for two games during the afternoon on Saturday, June 13th.

On another great day for baseball, Dell Rapids split a double-header with Vermillion on Saturday afternoon.  The first game was back and forth and saw Vermillion score seven runs in the top of the seventh inning to get a 14-11 come-from-behind win.

Brayden Pankonen had three hits in the game. Kittelson and Ruesink each had two hits.  Boechler, Mathis, Smith, and Brady Larson all had a hit in the game as well.

Dell Rapids did not let the setback linger between games.  They bounced back in the second game with a big 11-0 win on the 10-run rule in five innings to earn the split against Vermillion.

Dell Rapids scored five runs in the first, two in the second, and four more in the third inning for the victory.

Pankonen and Ruesink each had two more hits, Boechler picked up two hits, and Kittelson, Mathis, Jaton, Smith, and Larson all had a hit in the second game. 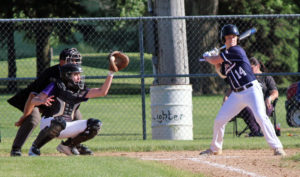 Having to wait an extra day to start their season due to a weather cancellation, the Dell Rapids 15/16 teener team played their first game of the season on the road in Beresford on Wednesday, June 10th.  Dell Rapids wasted no time scoring runs on their way to an 11-6 victory.

Brayden Pankonen finished the game with three hits and two runs scored.  CJ Smith finished with two hits.  Caleb Kittleson had a double.  Landon Ruesink, Aiden Boechler, and Dylan Mathis all had hits in the game as well. 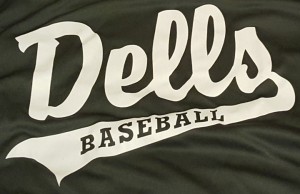 The Dell Rapids 15/16 Teener team finished their 2017 season at the 2017 15/16 State A VFW Tournament in Beresford on Friday, August 5th, and Saturday, August 6th.  Dell Rapids lost both of their games in the state tournament.

Dell Rapids finished with a 9-5 record in the I-29 League this season and finished runner-up in the Southeast Regional to qualify for the state tournament.

The Dell Rapids 15/16 Teeners split a pair of games during the week of June 20th.

On Tuesday, June 21st, Dell Rapids defeated Tri-Valley 15’s 12-2 in Dell Rapids.  The game ended after six innings due to 10-run rule.  Lealand Randel picked up the win pitching a complete game.  Leading the way offensively for Dell Rapids was Austin Ellingson who was 4-4 with four single and scored three runs.  Carter Gullickson also scored three times, and added a double and a single with two RBI.  Eddie Price and Logan Ruesink each collected two hits.

On Thursday, June 23rd, Dell Rapids fell to Garretson 8-6.  Cameron Bruhn, Keegan Miller, and Tyson Dahler each scored two runs.  Bruhn collected three hits.  Miller, Dahler, Logan Ruesink, and Ellingson each added a hit.  Defensively, Dell Rapids struggled committing four errors.  Ellingson took the loss on the mound.  He struck out 10 batters though 5 1/3 innings, but walked six.  Gabe Skonseng finished the final 1 2/3 innings and did not allow a run.  He struck out two and allowed one base on balls.

Dell Rapids currently has a 7-3 record on the year.

The Dell Rapids 15/16 Teeners won two games over the last week to improve to 2-1 on the year.

Dell Rapids defeated Tea Legion 10-4 on Monday, June 6th.  Dell Rapids jumped out to a fast start in the first inning with Austin Ellingson and Carter Gullickson each hitting singles.  Jeffrey Schuch reached based with a walk, and Keegan Miller picked up an RBI on a bases-loaded walk.  Lealand Randel then capped off the scoring in the first inning clearing the bases with a one-out triple down the left field line.  Dell Rapids added another run in the third inning when Chameron Bruhn drove in Schuch with a two-out single.  Dell Rapids added two more runs in the fourth inning, two more in the fifth, and one more in the sixth.  Gullickson picked up the win pitching the first four innings, and Ellingson closed out the game pitching the final three innings.

Dell Rapids came from behind to beat West Central Blue in dramatic fashion on Thursday, June 9th.  West Central led by a run entering the seventh inning.  Ellingson, who entered the game in relief in the sixth inning, struck out the side in the top half of the inning.  The first three batters for Dell Rapids reached based in the bottom half of the seventh.  Seth Spielman reached on an infield single, Tyson Dahler singled on a bunt, and Ellingson drew a walk.  Gullickson then jumped on the very first pitch he saw and drove it over the left field fence for a walk-off grand slam home run giving Dell Rapids an 11-8 win.  Matt Gillogly also hit a home run for Dell Rapids, a three-run shot in the third.