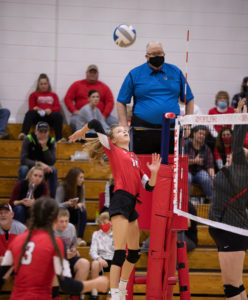 The Dell Rapids St Mary Cardinal volleyball team advanced to the SoDak16 Qualifying match of the Region 4B tournament with a win on Tuesday, but the post-season run ended there on Thursday, November 5th.  The Cardinals feel to the top-seeded Chester Area Flyers in Chester in straight sets by scores of 25-15, 25-13, and 25-10.

The Flyers were strong in all phases of the match.  Chester started the first set with a 10-2 run.  St Mary was only able to cut the lead to 11-6 before the Flyers went on another big run to make the score 20-10 as they went on to win the first set 25-15.

St Mary has their season come to an end with an overall record of 10-9.