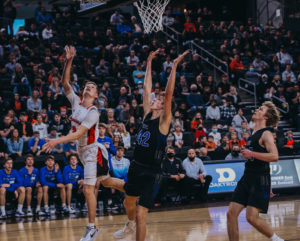 The Sioux Falls Christian Chargers took advantage of some offensive struggles by the Dell Rapids Quarriers in the middle quarters and defeated the Quarriers 64-52 in the semifinal round of the South Dakota State A Tournament on Friday, March 19th.

The Quarriers found themselves down by six points early in the first quarter, 10-4, but ended the first on an 8-2 run to end the first quarter tied 12-12.  Dell Rapids took their first and only lead of the game, 15-14, after a Landon Ruesink free throw with 6:12 to play in the second quarter.  The Chargers went on a 5-0 run and eventually pushed the lead to nine points, 28-19 with 2:01 to go in the half.  Connor Rentz scored the final two points of the half, and the Quarriers trailed 28-21 at halftime.

Sioux Falls Christian took advantage of the shots not falling for the  Quarriers in the third quarter.  The Chargers extended their lead to as many as 16 points, 46-30, with just under a minute to play in the third quarter.  They led 48-33 heading into the final quarter.  Dell Rapids could not get any closer than 12 points in the fourth quarter.  The Quarriers trailed 50-38 with 5:10 in the game after two free-throws by Connor Rentz, but every time Dell Rapids tried to make a run, the Chargers shut the door and extended their lead.