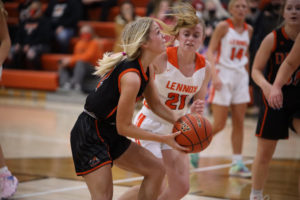 The Dell Rapids Quarrier girls basketball team played even with the Lennox Orioles for three quarters in Lennox on Monday, January 11th, but a big first quarter run was enough for the Orioles to get a 41-26 victory.

Lennox made all three of their three-point shot attempts in the first quarter and built a 21-6 lead by the end of the first quarter.  The Quarriers then played Lennox even the remainder of the game, but couldn’t chip into the lead.  Dell Rapids got within 11 points at 35-24 with 5:30 to play in the game, but was held to just two points the remainder of the game.

Dell Rapids (0-8) will host Milbank on Saturday, January 16th in a girls and boys double-header.  Both games can be seen on Big Sioux Media.

The Quarrier girls C basketball team fell to the Lennox Orioles girls C team 18-32 on Monday night in Lennox.  After trailing by only two points at halftime, the girls were unable to generate any offensive rhythm in the final two quarters.