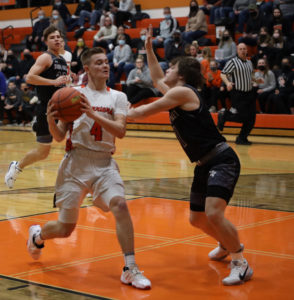 Colin Rentz finished with a rare triple-double, but the Dell Rapids Quarriers fell to the Dakota Valley Panthers at home on Friday, February 12th.  Dell Rapids held Dakota Valley to 32 first-half points, but the Panthers missed just three shots in the third quarter and scored 55 points in the second half as they defeated Dell Rapids 87-72.