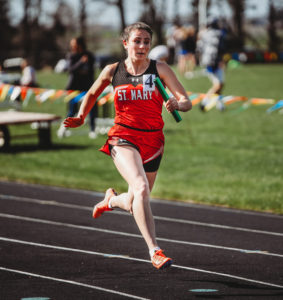 Records continue to keep falling in the 2021 season for the Dell Rapids St Mary Cardinal track team.  Two more records were broken at the Dell Rapids Invite on Monday, May 10th.

For the boys team, Jacob Vogel won the 3200m run with a time of 10:52.47.  Connor Libis placed second in the 800m run.  Nic Gaspar also had a second place finish in the 300m hurdles, and Noah Dennis was second in the discus.

The boys team finished fourth with a total of 67 points on the day.  The girls team had 32 points and finished seventh as a team.