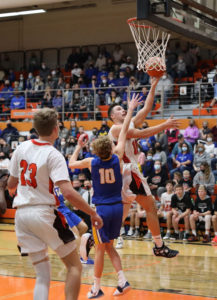 The Dell Rapids Quarrier boys basketball team qualified for the state tournament for the third straight year after two post season wins.  The Quarriers defeated the West Central Trojans 65-52 on Friday, March 5th at home in the Region 3A tournament.  Dell Rapids then traveled to Parkston and defeated the Rapid City Christian Comets 68-54 in the SoDak 16 on Tuesday, March 9th.

The Quarriers used a big first quarter to propel them to the 65-52 win over the Trojans.  Dell Rapids raced out to a 21-5 lead by the end of the first quarter.  The Quarriers led 36-19 at halftime.  That lead was big enough to survive a West Central run in the second half.  The Trojans held Dell Rapids to just seven points in third quarter and cut the lead to 43-37 heading into the final quarter.  West Central got the lead down to 47-43 with 5:27 to play, but Dell Rapids closed out the game on an 18-9 run for the win. 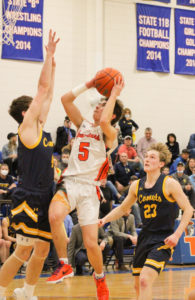 The Quarriers then hit the road on Tuesday, March 9th to Parkston to play the Rapid City Christian Comets in the SoDak 16 with a trip to the State A tournament on the line.

Dell Rapids (16-6) will be the #8 seed in the South Dakota Boys Class A State Tournament.  Their first game will be against #1 Vermillion on Thursday, March 18th at 12:00 p.m. at the Sanford Premier Center in Sioux Falls.