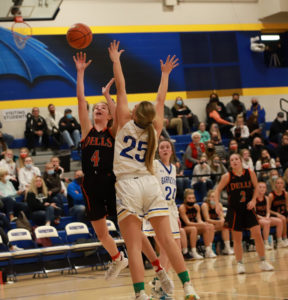 The Dell Rapids Quarrier girls basketball team took to the road on Tuesday, December 22nd, traveling to Garretson to take on the undefeated Blue Dragons.  The Quarriers played tough and held Garretson to their lowest point total of the season, but the Blue Dragons came away with the 52-44 win.

Dell Rapids held Garretson to nine points in the first quarter and took a 12-9 lead into the second quarter.  The Quarriers pushed their lead to seven points at 16-9, but Garretson outscored Dell Rapids 12-3 the remainder of the quarter for a 21-19 halftime lead.

Dell Rapids (0-3) will travel to Flandreau on Tuesday, December 29th.  The game can be seen on Big Sioux Media.

The Dell Rapids Quarriers girls JV basketball team traveled to Garretson on Tuesday, December 22nd, to take on the Blue Dragons.  The girls never found their rhythm resulting in a lopsided 18-42 loss.