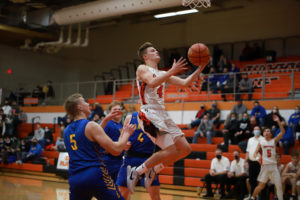 A big second half offensive surge for the Dell Rapids Quarriers gave them a 70-34 win over the Baltic Bulldogs on Monday, December 14th at Dell Rapids High School.

Dell Rapids was able to put a rough first half behind them.  The Quarriers led just 14-10 at the end of the first quarter.  They pushed the lead to 27-17 at halftime.  The offense got going in the third quarter and outscored Baltic 27-7 in the quarter for a 54-24 advantage heading into the fourth.  Dell Rapids also outscored Baltic in the fourth quarter 16-10 in the win.

Four players finished in double figures for Dell Rapids.  Landon Ruesink had a game-high 19 points with three steals and two assists.  Colin Rentz and Brayden Pankonen both had 13 points, five rebounds, and four steals each.  Carter Nelson also had 13 points and five rebounds.  Coby Maeschen had a game-high 10 rebounds.  Baltic was led by Brady Hookie with 12 points and four rebounds.  Bodie Murray had eight points.

The Quarriers (2-0) will travel to Tea to play the Titans on Friday, December 18th.  The game can be seen on Big Sioux Media.