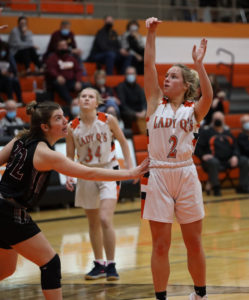 The Dell Rapids Quarrier girls basketball team won their final regular season game of the year.  The Quarriers hosted the Madison Bulldogs on Thursday, February 18th and got a 51-46 win.

The Quarriers overcame a five-point first quarter where they shot just 11%  (2-19) and trailed by 12 points at the break.   Dell Rapids outscored Madison  18-4 in the second quarter for a 23-21 halftime lead.  The Quarriers maintained a one-point lead at the end of third quarter 32-31.  The two teams traded leads in the fourth quarter, but Claire Wynja put the Quarriers ahead by four, 48-44, with a made three-point shot with :55 to go.  That made shot secured the win for the Quarriers.

Dell Rapids finishes the regular season with a 5-15 record.  The Quarriers will play at Garretson in the opening round of the Region 3A tournament on Tuesday, February 23rd.