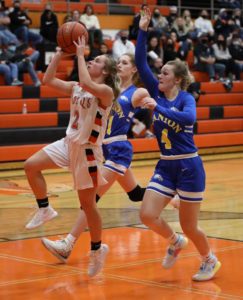 The Dell Rapids Quarrier girls basketball team erased a double-digit deficit and had a two-point lead late in the game, but the Canton C-Hawks took the 52-48 win on Thursday, January 7th, at Dell Rapids High School.  The Quarriers were playing in just their second home game of the year and first since December 15th.

Canton took the early momentum and lead in the first two quarters of the game.  The C-Hawks built a 10-point lead by the end of the first quarter, 21-11.  The Quarriers started to built a little momentum in the second quarter.  They cut the lead to 31-23 by halftime.

The Dell Rapids defense held Canton to just six third quarter points as the Quarriers took the lead.  Dell Rapids led took a 37-33, outscoring Canton 14-2 in a six minute stretch.  The Quarriers held a 40-37 lead heading into the final quarter.  Dell Rapids still maintained a 45-43 lead with 3:45 to play in the game, but Canton went on a 9-3 run to close out the game for the win.

Dell Rapids (0-6) will travel to Lennox on Monday, January 11th.  The game can be seen on Big Sioux Media.