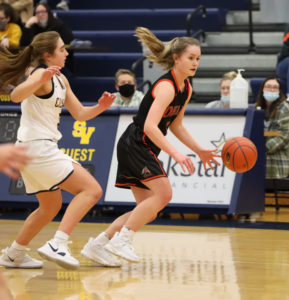 Leading by a point, 58-57, with just seconds remaining, the Dell Rapids Quarriers watched a shot from Sioux Valley go through the net with :07 to go that proved to be the game-winner as the Cossacks got a 59-58 come-from-behind win on Friday, January 23rd.

Sioux Valley held the early lead in the game.  The led 13-3 at one point in the first quarter and held a 16-8 advantage heading into the second quarter.  The Cossacks scored the first basket of the second quarter to lead by 10 again at 18-8.  Dell Rapids scored the next nine points to cut the lead to 18-17.  Sioux Valley was ahead 22-19 with 3:35 to go in the quarter before Dell Rapids went on an 8-0 run to lead 27-22 at halftime.

The Quarriers continued the momentum in the third quarter.  Every time the Cossacks got within four or five points, the Quarriers were able to make the timely basket to extend the lead.  Dell Rapids led 46-37 heading into the final quarter.   The Quarriers had a 10-point lead with 5:45 to play at 49-39.  Sioux Valley tied the game at 55-55 and then went ahead 57-55 with under a minute to play.  Claire Wynja made a three-point shot with :33 to go to give the lead back to Dell Rapids 58-57, but Sioux Valley got the game-winner on a couple of offensive rebounds to get the win.

The stats were just as even as the score.  Both teams shot 43% from the field and 33% from three-point area.  Both teams also had 13 team assists.  Sioux Valley had 17 turnovers, while Dell Rapids had 16, and the Cossacks had a slim 28-23 advantage in rebounds.   The difference in the game came down to timely hot shooting by Sioux Valley.  The Cossacks were 8-12 shooting in the fourth quarter, including 4-7 from three-point area, and 2-2 from the free-throw line.

Dell Rapids (1-10) will point Elk Point-Jefferson on Saturday, January 23rd in a girls and boys double-header.  The girls game is scheduled to tip-off about 1:30 p.m. and can be seen on Big Sioux Media.