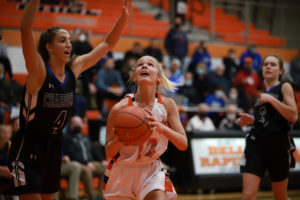 The Dell Rapids Quarrier girls basketball team hosted the Sioux Falls Christian Chargers, who received votes to be rated in the latest South Dakota media poll, on Tuesday, December 15th.  It was the first game of the season for the Quarriers.

The Chargers flexed their defensive muscle in the game causing 27 Dell Rapids turnovers on their way to a 65-29 victory.  Dell Rapids was not able to get much going offensively as they were limited to just 28 total shots in the game.  The Quarriers were within three points at 8-5 with 4:00 to go in the first quarter, but the Chargers ended the first quarter on an 11-2 run to lead 19-7.  The lead grew to 20 points by halftime at 38-18.  Dell Rapids was then held to just 11 second half points.

Dell Rapids (0-1) will travel to Tea in a girls and boys double-header on Friday, December 18th.

The Quarrier JV team fell to the Chargers 41-30.