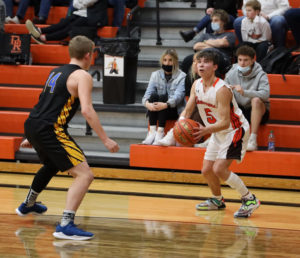 Brayden Pankonen set the Dell Rapids High School record for most three-point shots made in a game in a 77-33 win over the Canton C-Hawks in Dell Rapids on Thursday, January 7th.

Dell Rapids was in complete control the entire game.  They opened the game on a 20-0 run and led 32-2 at the end of the first quarter.  The lead grew to 52-12 by halftime.  The Quarriers then outscored Canton 25-21 in the final two quarters as the running clock was in play the entire second half of the game.

Pankonen led all scorers with 35 points on the night.  Colin Rentz had 12 points, eight rebounds, six assists, and four steals.  Landon Ruesink also finished in double figures with 10 points and five assists.  Every varsity player for Dell Rapids scored at least two points in the game.

Dell Rapids (5-1) will have a big road test on Tuesday, January 12th.  The Quarriers will head to Sioux Falls to play the Sioux Falls Christian Chargers.