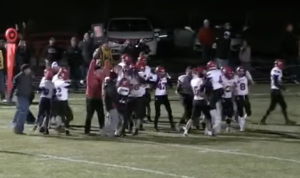 The Dell Rapids St Mary Cardinal football team is headed back to the Dakota Dome for the 2021 South Dakota Class 9B championship game.  The #5 seeded Cardinals traveled to #1 Avon and handed the Pirates their first loss of the season on Friday, November 5th, and it was a goal line stand in the final seconds the preserved the win for St Mary.

The Cardinals started this game the same way they had throughout the playoffs.  They took the opening drive of the game down the field, and after a five minute drive, Nic Gaspar had a three-yard run for a 6-0 lead.  The St Mary defense then forced a fumble.  With 3:26 left in the opening quarter, Lucas Flemmer had an 18-yard run and then a two-point conversion for an early 14-0 Cardinal lead.  That’s when the fireworks erupted for the remainder of the quarter.

The defenses played strong in the middle two quarters.  Neither team had a score in the second quarter, and the Cardinals continued to lead 20-14 at halftime.  The Pirates got the only touchdown in the third quarter.  With 7:55 to play in the quarter, Bierema had another touchdown run, this time from six yards away to give Avon a 22-20 lead.

The Pirates added to the lead early in the fourth quarter.  With 10:06 left in the game, Riley Rucktaeshel had a 19-yard run, and Jaden Stahl made another two-point conversion to push the Avon lead to 30-20.  The Cardinals got some momentum back just nine seconds later.  Gaspar broke loose for a 68-yard touchdown to pull the Cardinals within four points at 30-26.

With just under three minutes left in the game, the St Mary defense forced an Avon punt.  The Cardinals marched down the field aided by a 55-yard pass from CJ Smith to Gaspar on third down.  Smith then had a 24-yard touchdown pass to Gabe Lindeman with 1:21 to go to put the Cardinals back in front 32-30.

Avon was not done.  They used a hurry-up style offense to push the ball all the way down to the Cardinal five-yard line with just seven seconds left in the game.  After a timeout, the Pirates ran a reverse to Bierema, and he ran to the left side of the field as Ty Brown tackled him just short of the goal line to send the Cardinals to the dome.

“The boys played hard tonight.  They played a full 48 minutes and overcame a lot of diversity.  I am very proud of the way they played!” said head coach Ross Flemmer.  This was also Flemmer’s 150th win.

The Cardinals will play in the 9B championship game against Potter County at 10:00 a.m. on Thursday, November 11th.