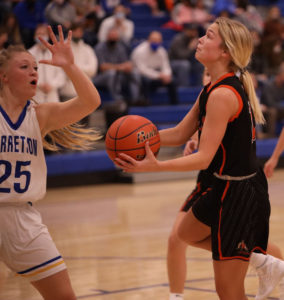 Needing to wait an extra day, the Dell Rapids Quarrier girls fell to the Garretson Blue Dragons in the opening round of the Region 3A tournament in Garretson on Wednesday, February 24th.  Garretson used a big fourth quarter to pull away 63-37.

Garretson used most of the third quarter to build a 15-point lead.  The Blue Dragons led 41-26 with 1:30 in the quarter.  The Quarriers ended the quarter on a  5-0 run and trailed 41-31 heading into the final quarter.  Dell Rapids had a couple of opportunities to get the lead to single digits early in the fourth quarter only to see the shots just not fall.  Those missed shots turned into fast break points on the other end for Garretson, and the Blue Dragons wore the Quarriers down.  Garretson outscored Dell Rapids 22-7 in the final quarter.