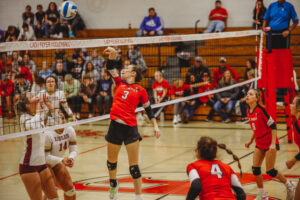 In a Region 3B tournament game of evenly matched teams, #4 seed Ethan Rustlers defeated #5 Dell Rapids St Mary Cardinals in Chester on Tuesday, November 2nd.  The match was close as expected, but the Rustlers were victorious in the five-set match.

Ethan got out to an early lead in the opening set which was enough to give them a 25-22 win.  The Cardinals pulled within a point a couple of times in the set, but Ethan was able to hold them for the win.  The second set was close throughout as well, but the Cardinals took a 24-20 lead.  After Ethan tied the score at 24-24, St Mary scored the final two points for a 26-24 win.

St Mary continued the momentum into the third set.  They were able to take the match advantage after a 25-23 win in the third set.  The Rustlers got out to an early 11-5 lead in the fourth set.  The Cardinals scored the next three points to pull within three points at 11-8, but Ethan then went on a big run.  The Rustlers outscored St Mary 8-1 for a 19-9 lead.  Ethan won the fourth set 25-12.  That momentum carried over into the fifth set.  Ethan led 6-1, and the Cardinals could not close the gap as the Rustlers won the fifth set 15-7 to win the match.

The Cardinals finished with an overall record of 16-11.