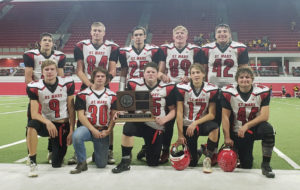 The Dell Rapids St Mary Cardinals made a trip to the Dakota Dome in Vermillion for the third time in school history on Thursday, November 12th to play for the South Dakota Class 9B Championship.  The other two trips to the championship game were in 2002 and 2009 for the Cardinals.

The Cardinals went into the game with a 7-2 record to play the 9-1 Wolsey-Wessington Warbirds.  A big first half by the Warbirds proved to be the difference as Wolsey-Wessington earned a 32-14 win over St Mary.

Wolsey-Wessington received the ball to start the game and put a score on the board in just over a minute and a half.  The Warbirds drove the ball 62 yards on six plays and scored with 10:17 to play in the first quarter for a 6-0 lead.  St Mary put together an 11-play drive that last six minutes in their opening drive of the game, but they were stopped and turned the ball over on downs to the Warbirds.  Wolsey-Wessington took over possession and score in six plays again going 63 yards.  The Warbirds led 12-0 with 2:13 to play in the opening quarter.

The Cardinals looked like they were going to find the endzone on their next drive.  But once again the Warbirds forced a turnover on downs on their own 16 yard line to keep St Mary off the scoreboard.  Wolsey-Wessington got one more score late in the second quarter.  The final touchdown came with :47 to play in the half, and Wolsey-Wessington led 18-0 at halftime.

St Mary received the ball to start the third quarter and found a spark in the opening drive of the second half.  The Cardinals marched down the field in six plays.  Connor Libis threw a touchdown pass to Nic Gaspar of 45 yards.  Ashaun Roach-Valandra threw a pass to Sam Palmer for the two-point conversion, and the Cardinals cut the lead to 18-8 with 9:00 to play in the third quarter.   The St Mary defense held Wolsey-Wessington out of the endzone in their lone possession of the third quarter.  The Warbirds got the ball do the Cardinal 10-yard line, but St Mary stopped them on fourth down to force a turnover on downs.

Working with some momentum, the Cardinals unfortunately had their next possession stopped on their own 38 yard line one play into the fourth quarter.  The Warbirds turned that stop into a score as they went 38 yards on seven plays to extend the lead to 26-8 with 7:59 to play.  St Mary scored again just over a minute later.  Libis connected with Palmer on a 45-yard touchdown pass with 6:49 to go in the game.  The two-point conversion was no good, and the Cardinals trailed 26-14.  The Warbirds were able to put the game out of reach after a nine-play, 58-yard drive that resulted in another score with 2:53 to go in the game for a 32-14 lead.

Roach-Valandra and Libis both finished with 10 tackles each in the game.   Max Herber and Samuel Lack both had six tackles, and Nick Wolles had five tackles.

The Cardinals finish their wild 2020 season with a 7-3 record.