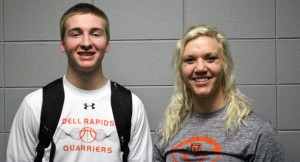 “It’s pretty cool whenever you look back on the history of Dell Rapids basketball and our names will be in there.  And for us to be the first two people that have done it in the same year, it’s really cool,” said Hoglund.

“It’s just a lot of fun, and it’s a big accomplishment for anyone in general, and then have two people do it, especially with someone as great as Ty and get to share that experience with him, is fun,” added Stofferahn.

For both Hoglund and Stofferahn, 1,000 points was never the main focus for them.  Hoglund said that the big emphasis for the team was finding their role, and that’s what the team did night in and night out, leading to the team’s success.  Stofferahn shared that they all worked hard as much as possible and always tried to hit the open person.

Teammates over the last four years also led to their success, and both Hoglund and Stofferahn recognized that.

“It started freshmen year with those seniors.  They were such great leaders.  It didn’t matter if you were a freshman, eighth grader, sophomore, junior, senior…it didn’t matter how old you were…if you were out on the court, they expected a certain level of play from you.  If they didn’t get it, they let you know.  They just did so well setting it up and making sure that you meet your expectations and you go past your potential and put everything out there,” said Stofferahn.

Hoglund said, “My freshman year I started playing with Cole Langer and Bryce Koch.  When you have those two names on your team, it only wants to push you harder to get better. They paved the way to where I’ve been today.  Just looking at their leadership and how they played the game and how they embraced the support form the community, it was just something that I really looked up to, and I just wanted to continue my success through them.” 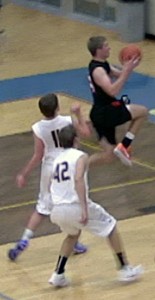 Not only did both Hoglund and Stofferahn reach 1,000 points this year, they are both heading to Mitchell to continue their basketball careers at Dakota Wesleyan University next year.  Men’s Head Coach Matt Wilber and Women’s Head Coach Jason Christensen are excited to have these two join their programs.

Wilber said, “Ty is going to fit great into our program in so many ways.  I think everyone is able to see the basketball ability, but the people that know him and our program understand how well he will fit in from a character and intangible standpoint.  We have been fortunate to have very high character people in our program, and I feel strongly that Ty will add to that part of our culture in our program and at our university.  With Ty as well as all of our returners and newcomers, we are excited to get him out here in Mitchell and see him go with our current roster and what that looks like.  I am not going to put expectations on him or anyone outside of coming everyday to get better and pursue the desire to be great.  We are hopeful that he will help to continue to push our program in the right direction.”

“Mikaela is an outstanding young lady infused with a tremendous work ethic. She is passionate about succeeding, both on the court and in the classroom, and has been part of a winning program during her career at Dell Rapids!” said Christensen.

Hoglund and Stofferahn are also excited for the next step of their careers.

“I just want to keep getting better and become the best player that I can be.  And with coach Wilber, he’s going to expect nothing less than my best effort every day in practice and every game.  I’m just looking forward to him pushing me and just exceeding my top potential,” Hoglund said.

“I’m looking forward to putting my best foot forward every day giving everything, playing with some new people that you know are right there at that level too, and being able to learn from them and grow as a basketball player and as a person.  I’m just really excited to get there and get started,” added Stofferahn.

The accolades didn’t stop at just a 1,000 points for Hoglund and Stofferahn.  Both Hoglund and Stofferahn were invited to play in the 3-Class Shootout in Salem on March 26th, and both are playing in the 2016 SDBBCA/Sanford Pentagon All-Star Game at the Pentagon on April 10th.  Stofferahn was also invited to play in the 10th Annual Southeast Area All-Star Basketball Games on April 3rd, was named a First Team Dak-12 All-Conference player, and named to the Class A All-State Second Team.  Hoglund was named to Dak-12 All-Conference First Team, Dak-12 Conference MVP, Class A All-State First Team, Gatorade SD Boys Basketball Player of the Year, and is nominated for 2015-2016 Mr Basketball which will be announced May 1st.