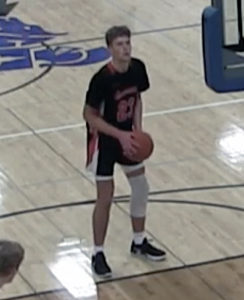 Dell Rapids was the team on fire to start the game.  They built a 19-14 lead by the end of the first quarter, but things turned for both teams in the second quarter.  The second quarter proved to be one of the biggest differences in the game.  Sioux Falls Christian outscored the Quarriers 29-10 to take a 43-29 lead into halftime.

The Quarriers made a run in the third quarter.  Dell Rapids pulled within three points at 52-49 with 3:30 to play, but that was as close as they would get.  The Chargers ended the quarter on a 10-4 run for a 62-53 lead heading into the final quarter.  The Chargers outscored the Quarriers again in the fourth quarter 22-16.

Nine different players finished in double figures in the game.  The Quarriers were led by Connor Rentz with 20 points and four rebounds.  Brayden Pankonen had 17 points.  Colin Rentz had 13 points, six rebounds, and three assists.  Carter Nelson had 10 points and six rebounds.  Landon Ruesink had eight rebounds.  The Chargers were led by Tyler Prins with 19 points, Brooks Nelson with 17 points, Xavier Van Beek with 14 points, Jaden Witte with 13 points, and Tate Snyder with 11 points.

Dell Rapids (5-2) will host Milbank on Saturday, January  16th.  It will be a double-header with the girls, and the seniors will be recognized prior to the game.  Both games can be seen on Big Sioux Media.