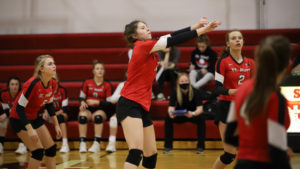 Colman-Egan came to Dell Rapids St Mary High School on Monday and went home with a four set win.  The Hawks took the first set with ease by a score of 25-11.  The Cardinals regrouped and led for most of the second set.  Colman-Egan finally tied the set late, but St Mary took the win 28-26 to even the match.  Colman-Egan, again, was able to get to a sizeable lead in the third set and won 25-13.  The two teams battled tough in the fourth set, but the Hawks ultimately took the fourth set 25-20 to win the match.

Twenty-four hours later, the Cardinals hosted the Canistota Hawks on Tuesday.  St Mary was able to put  Monday behind them and  took the  match over Canistota in straight sets.

The first two sets were played very close.  In the opening set, the two teams were tied multiple times.   The Cardinals broke a 10-10 tie and scored four points in a row for a 14-10 lead.  The lead grew to 17-12.  The Hawks pulled within a couple of points a couple of times, but the Cardinals never lost the lead and won the first set 25-19.  The second set played out much like the first.  The Cardinals got out to a 13-7.  That lead grew to eight points at 18-10, and the Cardinals held on for a 25-21 win.  St Mary then completely cruised through the third set winning 25-5 to take the match.

The Cardinals (9-7) will end the regular season in Garretson on Friday, October 30th.