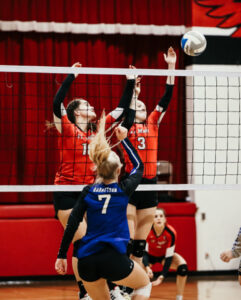 The Dell Rapids St Mary Cardinals hosted the #3 team in Class A, the Garretson Blue Dragons, on Tuesday, October 5th.

Garretson got on a roll early in the first set and continued it throughout the match.  With the score tied 1-1 in the opening set, the Blue Dragons scored seven in a row for an 8-1 lead.  They continued to roll from there winning the first set 25-9.  The momentum stayed with Garretson the entire match as they won the next two 25-14 and 25-14.