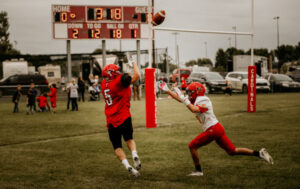 The Dell Rapids St Mary Cardinals hosted the Avon Pirates on Friday, September 3rd at Rickeman Field.  After St Mary scored the first touchdown, Avon scored 48 straight points on their way to a 48-14 win over the Cardinals.

CJ Smith completed a 23-yard touchdown pass to Tate Bunkers with 3:17 to play in the opening quarter for the first score of the game.  That was the only lead the Cardinals would hold.  The Pirates tied the game after a 20-yard Brady Bierema run, and then they took the lead on a two-point conversion by Jaden Stahl.  Avon led 8-6 at the end of the first quarter.

Tyler Tjeerdsma scored the final touchdown for Avon with 10:14 to play in the fourth quarter.  The Cardinals got another score when Lucas Flemmer had a 54-yard touchdown run with 9:45 to go in the game.  Owen Vargas completed a pass to Camden Gilbert for the two-point conversion.

Flemmer finished the game with three carries for 65 yards and a touchdown.  Smith had five carries for 38 yards.  Gabe Lindeman had five runs for 18 yards.  Smith was 5-13 passing for 64 yards with a touchdown and an interception.  Bunkers had two catches for 60 yards and a touchdown.  John Pica had 14 tackles in the game.  Ty Brown finished with 11 tackles.  Lindeman had nine tackles, and Noah Olund and Nic Gaspar both had seven tackles each.

The Cardinals travel to Colman to play the Colman-Egan Hawks on Friday, September 10th.