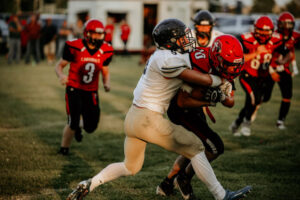 The Dell Rapids St Mary Cardinals started their 2021 football season at home on Friday, August 23rd.  The Cardinals hosted the Gayville-Volin Raiders, and it was the Raiders who went home victorious, 42-8.

The Cardinals looked to get the momentum very early in the game.  Gabriel Lamb dropped Nate Quatier for a loss on the first play of the game, and then CJ Smith intercepted Quatier’s pass on the next play.  St Mary had the ball two plays after the opening kickoff.  The momentum would be short lived however.  The Raiders forced and recovered a fumble three plays later.

St Mary continued to struggle a bit offensively in their next drive.  The Raiders forced and recovered another fumble late in the quarter.  The Cardinal defense was able to hold Gayville-Volin to a punt, but the punt returned was fumbled by St Mary and recovered by the Raiders.  The Raiders turned that into points after a one-yard touchdown run by Quatier.  Another two-point conversion made the score 24-0.

The Raiders stopped a Cardinal drive that was moving in a positive direction for St Mary.  This time the drive stopped on an interception that was returned 48 yards for a touchdown by Ben Rumsey with 9:19 to play in the first half.  Gayville-Volin got another interception later in the second quarter, this time by Hirsch.  They turned that into  more points, scoring with 1:05 to play in the second quarter, and the Raiders led 36-0 at halftime.

St Mary took the kickoff to start the second half.  The Cardinals looked to be headed towards a score late in the third quarter, but the Raiders got their third interception of the game.  Rumsey intercepted a pass in the endzone and ran it back all the way for a Raider touchdown with 4:31 to play in the third quarter to make the score 42-0.  St Mary was able to find the endzone with 7:37 left in the game.  Smith connected with Camden Gilbert on a 23-yard touchdown pass.  Smith then completed a pass to Lucas Flemmer for the two point conversion.

Noah Olund led the defense with eight tackles.  Brown finished with five tackles.  Nic Gaspar had 4.5 tackles, and Bunkers and Kyle Bares both had four tackles each.  Smith also had an interception.

The Cardinals (0-1) will travel to play the Alcester-Hudson Cubs on Friday, August 27th.