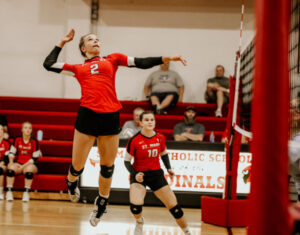 The Dell Rapids St Mary Cardinal volleyball team won their fourth straight match on Monday, September 13th.  The Cardinals defeated the Sioux Falls Lutheran Eagles in straight sets by set scores of 25-10, 25-18, and 26-24.  During their four match winning streak, the Cardinals have only lost one set.  St Mary, now 8-1 on the season, has only lost four sets total on the year.

The Cardinals seemed ready to make quick work of the Eagles.  In the opening set, St Mary scored the six points.  They pushed the lead to 12-2 and continued to roll from there winning the first set 25-10.  Sioux Falls Lutheran regrouped during the break and jumped out to a 10-3 lead to start the second set.   St Mary, though, slowly chipped away at the lead and eventually tied the set at 13-13.  The set was tied again 15-15 before the Cardinals finished the set on a 10-3 run to win 25-18.  The Eagle again got out to an early lead in the third set at 9-2.  St Mary’s comeback was a bit slower than in the second set.  Sioux Falls Lutheran was able to keep a three-to-four point lead throughout much of the middle portion of the set.  The Cardinals eventually tied the set 17-17.  The teams went back and forth trading points until the score was 21-21.  The Eagles then scored the next three points to lead 24-21.  The Cardinals put one more rally together scoring the final five points for the 26-24 win.

The Cardinals will travel to White to play Deubrook on Thursday, September 16th.