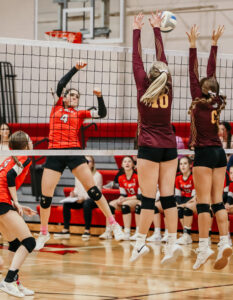 The first set was close throughout the entire game.  Neither team had a lead of more than two points until the Cardinals took a 22-19 lead late.  The Bulldogs tied the score at 22-22 and then again at 23-23, but the Cardinals scored the final two points for the win.

De Smet started the third set on a 7-1 run for an early lead.  After the Cardinals pulled within two points at 7-5, the Bulldogs were able to keep about a five-point lead throughout most of the set.  The lead grew to nine points at 22-13, and the Bulldogs also led 24-17.  The Cardinals rallied with four straight points, but De Smet finished the set with at 25-21 win.

St Mary built a big lead to start the fourth set and led 11-1.  The Cardinals cruised from there for the 25-14 set and match win.