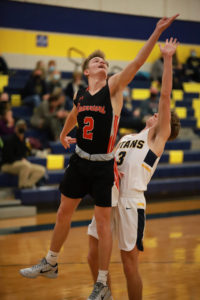 A layup by Conner Rentz with :47 to go in the game put Dell Rapids down by just two points at 63-61.  Caden Ellingson responded with a reverse layup with :38 on the clock and also drew a foul on the play.  Ellingson missed the free-throw, and Colin Rentz  drove the length of the court for a layup.  After an errant pass that was stolen by Brayden Pankonen, Landon Ruesink found a wide-open Coby Maeschen who made a layup from the right block after a pump fake to tie the game at 65-65 with :07.4 to go.  The Titans called their final timeout to try to set up the game-winning play.

Full court pressure by the Quarrier defense forced a Tea travel in the back court, and Dell Rapids had a chance to win the game with :04.4 seconds.  Col. Rentz put the ball in play in front of his bench with a pass to Maeschen.  Col. Rentz broke for the hoop, and Maeschen handed him the ball.  With is body twisting, Col. Rentz looped a shot with his right hand towards the hoop, and the ball went off the backboard and through the next as time expired for the 67-65 win.

The game lived up to the hype of an early-season top-five match-up between the two teams.  Dell Rapids entered the game ranked third in the media polls, while Tea Area was ranked fourth.

The two teams battled back and forth in the first two quarters of the game trading leads along the way.  Dell Rapids held a three-point lead at the end of the first quarter at 16-13.  Tea outscored Dell Rapids by three points in the second quarter, and the game was tied 32-32 at halftime.  The game was again tied 38-38 with 4:30 to play in the third quarter, but the Titans finished the quarter on a 14-2 run for a 52-40 lead heading into the fourth quarter to set the stage for the dramatic come-from-behind win for Dell Rapids.

Dell Rapids (3-0) will have a break until Thursday, December 31st.  The Quarriers will play the Dell Rapids St Mary Cardinals in the Entringer Classic in Colman at 5:00 p.m.