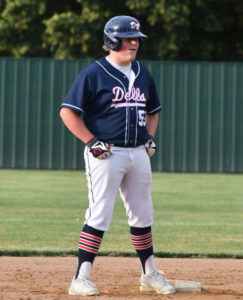 The Dell Rapids Legion baseball team won their seventh game in a row on Thursday, July 7th.  Dell Rapids got a 14-5 road win at Flandreau, using a seven-run fourth in the victory.

Flandreau took the early lead, 3-0, in the bottom of the first inning.  Dell Rapids got one run back in the top of the second.  Austin Harvey had an RBI single.  Dell Rapids took the lead with their seven-run fourth inning.  CJ Smith had an RBI single and then later scored on a wild pitch. Sutton Williams stole home.  Lincoln Fersdahl scored on an error, and then Jack Henry had a two-run single.  Dylan Mathis drove home the final run of the inning on a ground out.

Dell Rapids pushed the lead to 11-1 after a three-run fifth.  Treyse Eastman had a two-run double and then scored on an error.  Flandreau scored a run in the bottom of the fifth.  They got one more run in the sixth inning to make the score 11-5.  Dell Rapids got three more runs in the top of the seventh.  Smith had a two-run double, and Drake Eastman had an RBI single.