The state tournament run for the Dell Rapids legion baseball team came to an end on Sunday, July 31st.  Host team Gregory built a big lead Dell Rapids could not overcome in a 10-3 victory.

Rechtenbaugh finished with two singles and an RBI.  Mason Stubbe also had two hits.  Pankonen and Henry both had a single and an RBI.  Dylan Mathis and Aiden Boechler each added a single.

Dell Rapids finishes the season with an overall record of 22-12.

In the first elimination game of the 2022 South Dakota Class B Legion State Tournament, Dell Rapids had a 13-run inning and defeated Hartford/Humboldt 20-4 on Saturday, July 30th.

Dell Rapids took advantage of three walks to start the game in the top of the first inning.  Will Jaton had an RBI single, Jack Henry scored on a wild pitch, and Aiden Boechler had a two-run single to give Dell Rapids a 4-0 lead.  Haratford/Humboldt scored three times in the bottom of the first.  Neither team scored in the second, and Dell Rapids continued to lead 4-3.

Boechler had three hits, two doubles, and four RBIs in the game.  Brayden Pankonen, Jaton, and CJ Smith all had two hits and three RBIs each.  Dylan Mathis also had two hits with two RBIs.  Treyse Eastman added two hits.  Braden Fersdahl finished with a double.  Henry had two RBIs, and Mason Stubbe had one RBI.  Tad Tjaden pitched all five innings and allowed four earned runs on five hits and a walk with four strikeouts.

Dell Rapids will play about 3:30 on Sunday, July 31st in Gregory.

Dell Rapids and Vermillion traded leads a couple of times with Vermillion taking a 9-7 win in an opening round game at the 2022 South Dakota Class B Legion State Tournament on Friday, July 29th in Gregory.

Dylan Mathis had an RBI single, and Jacky Henry stole home to give Dell Rapids a 2-0 lead in the top of the first inning.  Vermillion got one run back in the bottom of the inning.  Vermillion then took their first lead with three runs in the second and led 4-2 going into the third inning.

Rechtenbaugh had two hits and an RBI.  Brayden Pankonen and CJ Smith both had two hits.  Mathis, Jaton, Eastman, and Boechler all finished with a single and an RBI.  Jack Henry and Mason Stubbe both added a hit.  Henry pitched 1 2/3 innings and allowed four runs, three earned, on five walks with two strikeouts.  Pankonen pitched 3 1/3 innings and allowed four earned runs on six hits and three walks with two strikeouts.  Jaton pitched one inning an allowed an earned run on a walk.

Dell Rapids will play Hartford/Humboldt on Saturday, July 30th at 10:00 a.m. in an elimination game.

Dell Rapids had to win two games against Volga in the Region 2B championship on Thursday, July 21st, and that’s exactly what they did.  They won the first game 11-8 to give Volga their first loss in the tournament and force a second championship game.  In the second game, a grand slam by Dylan Mathis in the fourth inning pretty much sealed the deal for Dell Rapids.

Volga had a 2-1 lead through four innings of play, and then Dell Rapids’ offense came alive.  Landon Ruesink had a three-run double in the top of the fifth.  Jack Henry followed with an RBI triple, and Mathis had an RBI sacrifice fly to give Dell Rapids a 6-2 lead.  After Volga scored one run in the bottom of the fifth, Dell Rapids added five more in the top of the sixth.  Brayden Pankonen and Ruesink each had an RBI single, Henry had an RBI double, and Will Jaton had a two-run single.  Volga also scored five times in the bottom of the sixth to make the score 11-8, and that’s where game one finished.

One big inning by Dell Rapids put them in the driver’s seat and helped punch their ticket to state.  Volga scored one run in the top of the first for an early 1-0 lead.  Dell Rapids had one of their two big innings in the bottom of the sixth, scoring six times.  Eastman had an RBI ground out.  Stubbe added an RBI single.  Pankonen reached on an error that scored Aiden Boechler. Mathis and Jaton drew back-to-back bases loaded walks for a 6-1 lead.

Volga had a big inning of their own in the top of the third.  They scored five times to tie the game 6-6.  Dell Rapids, however, took the lead back in the bottom of the inning.  Pankonen had an RBI ground out, Stubbe scored on a wild pitch, and Ruesink scored the final run of the inning to lead 9-6.  Volga pulled within a run, 9-8, after two runs in the top of the fourth.  And that’s when Dell Rapids’ offense exploded.

Smith started the scoring in the bottom of the fourth with an RBI single.  Pankonen plated two runs with a single.  Henry had an RBI, bases loaded walk.  Mathis then launched the very next pitch to center field for a grand slam home run to give Dell Rapids a 17-8 lead.  Dell Rapids won the game on the 10-run rule in the bottom of the sixth when Jaton hit a double scoring Henry.

Jaton had two doubles and two RBIs.  Smith and Stubbe both had two singles and an RBI.  Mathis had a home run and five RBIs.  Pankonen added a single and four RBIs.  Ruesink, Henry, and Eastman all had an RBI.  Boechler pitched the whole game and allowed eight runs, five earned, on two hits and eight walks with four strikeouts. 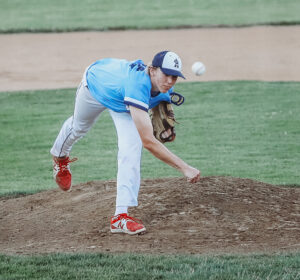 Dell Rapids punched their ticket to the Region 2B Championship with a 19-10 win over Madison on Wednesday, July 20th at Rickeman Field.  Dell Rapids scored in every inning but one as the two teams combined for 24 hits and 11 errors in a slugfest.

Dell Rapids will get a rematch with Volga in the Region 2B championship game on Thursday, July 21st at 5:30 p.m.  Dell Rapids will need to win two games against Volga to advance to the state tournament. 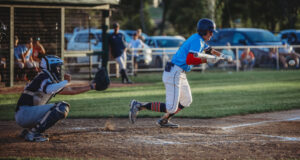 Dell Rapids took advantage of three errors by Volga in the sixth inning to tie the game, but Volga rallied in extra innings for a 5-2 win on Tuesday, July 19th.  Volga advances to the championship game of the Region 2B tournament on Thursday.  Dell Rapids faces elimination on Wednesday.

Parker Puetz got things going right away for Volga with a lead-off solo home run in the top of t he first inning.  Volga added another run in the top of the third on a dropped third strike passed ball.  The score remained 2-0 in favor of Volga until the bottom of the sixth.

Mason Stubbe reached on an error to start the inning for Dell Rapids, the first error committed by Volga in the inning.  After Stubbe stole second, Brayden Pankonen had an infield single to short stop.  The throw over to first, while late, kicked away from the first baseman allowing Stubbe to score.  That was the second error of the inning.  As Volga attempted to make a play at the plate on Stubbe, Pankonen advanced towards second.  The throw by the catcher to second kicked into center field, the third error, and allowed Pankonen to move to third.  Landon Ruesink followed with an RBI sacrifice fly to center to tie the game.

Dell Rapids put together a small rally in the bottom of the seventh.  Aiden Boechler had a one-out single and then stole second.  Will Jaton lined a ball to right field in which Conner Gross made a diving catch to keep the game tied.  That play seemed to shift momentum to Volga.  Boden Schiller hit a two-run double, and Gross had an RBI sacrifice fly to give Volga a 5-2 lead in the top of the eighth.

Dell Rapids was held to just two hits.  Pankonen and Boechler each had a single.  Ruesink finished with an RBI.  Jaton pitched seven innings and allowed five runs, four earned, on seven hits and four walks with three strikeouts.  Ruesink pitched one inning and allowed one hit and two walks.

Dell Rapids won two games on the first day of the Region 2B Legion Baseball Tournament at Rickeman Field on Monday, July 18th.  While it wasn’t easy in either game, Dell Rapids will play Volga in the semifinals on Tuesday, July 19th.

Joe Rechtenbaugh had three hits and three RBIs.  Will Jaton had two hits, one a triple, and two RBIs.  CJ Smith and Treyse Eastman both had two hits and an RBI.  Austin Harvey finished with a hit and two RBIs.  Brayden Pankonen and Landon Ruesink each had a hit and RBI.  Mason Stubbe, Braden Fersdahl, and Sutton Williams all added a hit.  Jack Henry had an RBI.

Dell Rapids broke an 8-8 tie with three runs in the top of the seventh to advance to the semifinal round.  Madison led 2-1 after the first inning.  Dell Rapids then scored five times in the top of the second and two more in the third for an 8-2 lead.  Madison then rallied for three runs in the bottom of the fourth, two in the fifth, and one more in the sixth to tie the game 8-8.

Ruesink broke the tie with an RBI double.  Henry had an RBI ground out that scored Tjaden.  Smith then reached on an error that scored Ruesink for the third run of the inning. 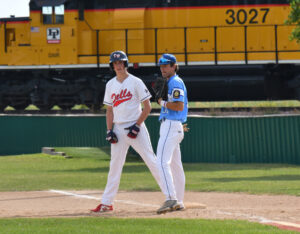 Dell Rapids will be hosting the Region 2B tournament Monday, July 18th through Thursday, July 21st.  They will play the first game of the tournament against Flandreau starting at 12:30 p.m. at Rickeman Field. 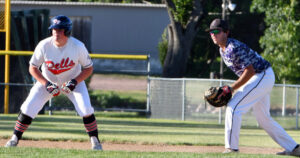 Dell Rapids built a 4-0 lead in the first two innings which helped them to a 12-4 victory over Madison at home on Monday, July 10th.

Madison got on the board in the top of the third, but Dell Rapids responded with three more runs in the bottom of the inning.  Treyse Eastman had an RBI single, Jaton had an RBI ground out, and Brayden Pankonen reached on an error that scored Joe Rechtenbaugh.