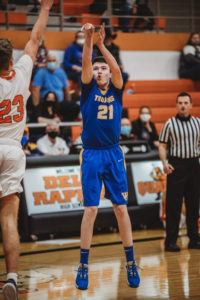 The West Central Trojan boys basketball team started their 2020-2021 season on the road at Dell Rapids on Friday, December 11th.  The Trojans faced a tough Quarrier defense and fell 62-42.

The Quarrier defense forced 24 turnovers on 15 steals in the game while holding West Central to just 32% (15-47) shooting from the field.