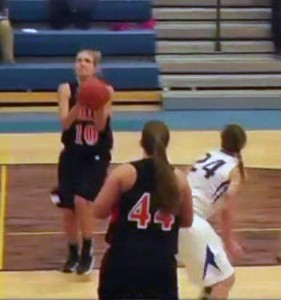 The West Central Trojans girls basketball team defeated the Dell Rapids Quarriers 48-34 on Tuesday, January 21st, in Hartford.  Must of the first quarter was back and forth.  The Quarriers took an 8-7 lead with 3:30 to go on a Brittany Kludt three-point shot, but the Trojans finished off the quarter on an 8-0 run to take a 15-8 lead after the first quarter.  The West Central offense struggled in the second quarter as the Trojans only scored two points.  The Quarriers were able to cut the lead down to 17-16 by halftime.

The third quarter was the tough offensive quarter for the Quarriers, as Dell Rapids was only able to score three points while West Central found their rhythm to take their largest lead of the night at 33-19 at the end of the quarter.  Both teams were able to knock down a few shots and free throws in the fourth quarter, but Dell Rapids was unable to close the gap.

The Quarriers fall to 4-5 overall and 3-3 in the Dakota XII Conference.  Dell Rapids will host Sioux Valley on Friday, January 24th, and the game will be webcast on Big Sioux Media.