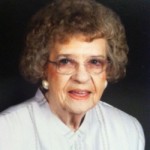 Shirley Jensen, 83, went to heaven on Saturday, June 30, 2012. Funeral service will begin at 2:30pm on Tuesday, July 3, 2012, at George Boom Funeral Home with burial to follow at Hills of Rest Memorial Park.

Shirley was born February 12, 1929 in Arlington, SD to Harry and Dena (Gibson) Corey. She graduated from Windom High School in Windom, MN. She was united in marriage to John C. Jensen on July 15, 1950 in Worthington, MN. The couple moved to Sioux Falls in 1952 where they started their own trucking business in which Shirley kept the books. In 1980, they moved to their country home in Renner, SD which they both loved. Shirley belonged to the First United Methodist Church in Sioux Falls where she volunteered for many years. She spent her life loving her family.

In her free time, Shirley enjoyed traveling with John to Hawaii and Las Vegas, bowling with friends, taking care of her flowers and cooking for everyone. She especially loved to spend time with her grandchildren.

Shirley was preceded in death by her parents, two brothers, and two sisters.  http://www.georgeboom.com/