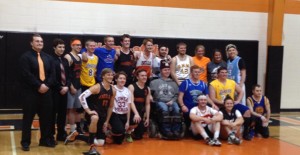 The annual “Seniors vs Staff” basketball game was held Friday, May 13th, after the Dell Rapids High School Awards Banquet.  This year’s charity the seniors chose was the Shriner’s Hospital in honor of Austin Machmiller.  The event raised $658 throughout the evening.  The FFA matched the money raised by the event for a total of $1,316 donated to the Shriner’s Hospital.

The seniors “won” the game at the buzzer on a three-point shot by Trey Randel! 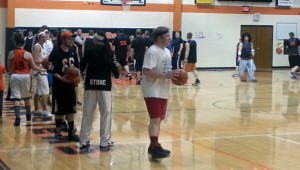 The 2nd annual Seniors vs Staff charity basketball game was held on Friday, April 4th.  The event was a benefit for the MS Walk in honor of Dell Rapids High School senior Damon Scott, 2014 MS Walk Ambassador.  Throughout the night, raffle items were given away and there was also items for sale through a silent auction.  $5,500 was raised during the benefit at the Dell Rapids High School gym.  The seniors won the game in the final moments 88-87.