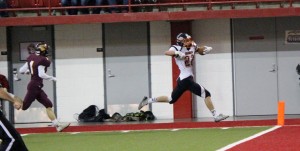 Dell Rapids Senior Riley Schmidt has earned a 2014 National High School Athletic Coaches Association (NHSACA) All-American honor.  Schmidt finished the 2014 season with 1,404 rushing yards on 140 carries with 19 rushing touchdowns.  Schmidt also had 18 catches for 429 yards and two touchdowns.  Schmidt was also a special teams force.  He had nine kick-off returns for 356 yards and three touchdowns along with 11 punt returns for 240 yards and a touchdown.  Schmidt scored both touchdowns for the 11A State Champion Dell Rapids Quarriers in the championship game against Madison.  He won the SD Coaches Association Outstanding Back Award and the SD Sports Writers “Joe Robbie” MVP award for his efforts in the game.  He won the same two awards in the 2012 championship game win over Harrisburg.