Two members of the Dell Rapids PBR amateur baseball team will soon be members of the South Dakota Amateur Baseball Association Hall of Fame.  Dale Solberg and Bruce Mogen will be two of the five 2015 SDABA Hall of Fame inductees later this year.  The other inductees are Tom Kessinger (Renner), Rod Merriam (Huron), and Daryl Deneke (Rapid City).

The new inductees will be recognized during the state amateur baseball tournament August 3rd – 14th in Mitchell.  The SDABA Hall of Fame Banquet will take place in September.

Dell Rapids PBR kept their chances of qualifying for the State B Amateur Baseball Tournament alive with a win Wednesday night over Humboldt 7-4.  The win gives PBR two more chances to make the state tournament.  PBR will face Salem Friday night at 8:00.  If they win, they will qualify for the state tournament, but if they lose, they will have one last chance in the “last chance” game Saturday afternoon at 4:30.

The Dell Rapids Mudcats, whom have already qualified for the state tournament, will play tonight against Madison at 8:00 as they continue their quest for the District 4B Championship.

The Dell Rapids Mudcats and Dell Rapids PBR teams will do battle for the third time this year as they meet in the final game of today’s District 4B Tournament in Salem.  The Mudcats come into the district tournament as the second seed.  PBR is the seventh seed and has already posted a win by defeating Tea 3-0 yesterday afternoon.  The two teams split during the regular season with PBR winning 5-2 on June 7th and the Mudcats winning 9-4 on June 22nd.  Today’s game is scheduled for around 6:00 p.m. in Salem.

Dunn also picked up the win on the mound pitching all seven innings giving up just one run, which was unearned, on two hits, three walks and struck out nine.  Both hits against Dunn went to Bucky Nettles as two singles.

PBR will next play in the district tournament which will run July 20-28 in Salem.

Dell Rapids PBR left 13 men on base, but scored enough to beat the Madison Broncos 9-7 at Rickeman Field Thursday night (July 12).  PBR never trailed in the game jumping out to a 4-0 lead after 3rd inning.  Madison cut the lead in half scoring two in the top of the 4th, but PBR scored three in their half of the 4th to take a 7-2 lead.  Madison would chip away getting as close as 8-7 after the 7th inning.  PBR would add a run in the bottom of the 8th to hold on to the 9-7 win.

Kevin Krull lead PBR with four hits in the ball game and had 3 RBI.  Landon Klock had two hits and an RBI, and Clarence Fjellenger had a double with 2 RBI on the night.

PBR will host Humboldt in their final league game on Sunday, July 15, at 7:30 p.m. at Rickeman Field.  The game will be webcasted. 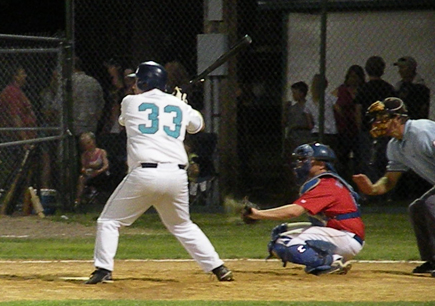 Friday night baseball during Quarry Days between the two amateur baseball teams from Dell Rapids has seen many exciting and intense games.  This year during the 25th annual Take Me Out to the Ballgame event (which was streamed live on Big Sioux Media) looked to be more one-sided than not with the Mudcats jumping out to a 2-run lead after one complete inning and Matt Wilbur on the mound for the Mudcats in total control.  The home team added another run in the 2nd and the 3rd but went scoreless in the 4th.  Holding a 4 nothing lead into the bottom of the 5th Nate Henry jacked a two run homer moving it up to a 6-nothing score.  And then the biggest run producing inning for the Mudcats came in the bottom of the 6th when they produced 3 more runs off of PBR started, Kevin Krull.  With the score sitting at 9-zip, Krull was done on the mound and Dale Solberg took over in relief and sat the Mudcats down in order not allowing any more runs.  PBR also managed 4 runs of their own in the top of the 8th inning (the final inning for Wilbur on the mound).  In the top of the 9th, Mark Hauck came in relief and got the save.  Travis Peters was 3 for 4 while Hauck and Henry were both 2 for 4 for the Mudcats while PBR managed only 6 hits.  The big hitter was Bruce Mogen, 2 for 4. 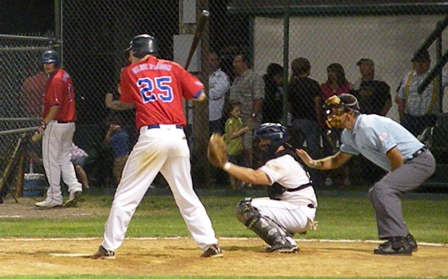