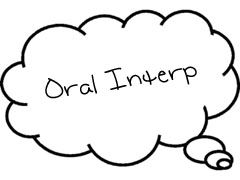 Olvia Clark, Jay Holm, and Ella Lueders from Dell Rapids also earned a trip to the state festival for their regional performances in Brookings on Tuesday, November 14th.  Clark will be performing in the Non-Original Oratory category.  Holm will be in Story Telling, and Lueders will perform a piece in Serious.  Holm and Lueders will also perform a Duet.  Tim Jaycox is an alternate for the Humor category.  Also earning an alternate position was the Readers Theater team of Morgan Nemmers, Lueders, Holm, Abby Stauffenecker, Jaycox, and Clark.

Several Dell Rapids students have performed well in their events over the past few days.

Olivia Clark qualified for the state oral interp competition in poetry with her performance at the region contest on Tuesday, November 15th.  Averi Pankonen qualified as an alternate in the oratory category.  The duet team of Tim Jaycox and Ella Lueders also qualified as an alternate.  Morgan Nemmers, Abby Stauffenecker, and Sage Shellum also had strong performances at the region competition.

The Dell Rapids quiz bowl team competed at Sioux Falls Roosevelt on Monday, November 14th.  The team of Joey Abbott, Micah Gleason, Justin Dorn, and Stephanie Dennis placed 13th out of 46 teams in the competition.  The other two Dell Rapids teams each earned two wins in the six-round competition.