Midwest Fresh Logistics has already begun dirt work on their 20,000 square-foot facility that will cost around $2.5 million.  Bricko mentioned they hope to begin foundation work within the next week or two.  Plans are to have the facility operational somewhere between the end of March to the middle of April in 2016.

Bricko said, “The vision of the company is to improve the delivery of fresh produce to the upper Midwest region.  The primary

function of the employees of the facility is going to be to unload the trucks, re-sort the product according to the region that it’s going to end up at, and put it back on the truck for final delivery. The majority of the jobs initially will be material handling, supervisors for material handling, and of course an operations manager for the facility.  Initial thought is eight to 10 employees.”

Heiberger mentioned, “How wonderful for you to pick Minnehaha County to put your company in and join us in a great team.  We have wonderful people here in Minnehaha County.  We are happy to have you as part of our county, obviously, because our county runs on property taxes.  Any new economic growth in the county is a plus for all the residents of Minnehaha County.”

Not only was the ground-breaking ceremony to celebrate Midwest Fresh Logistics, but the ceremony also celebrated the establishment of the new industrial Fiegen Development Park within the city limits of Dell Rapids.

“This will be officially our first industrial park within the city limits of Dell Rapids.  I greatly appreciate everybody’s efforts,” noted

Heiberger also said, “Congratulations to Dell Rapids for putting together the Fiegen Development out there. It’s wonderful that you guys got a park going on in your own town.  Thank you for what you’ve done.”

The city of Dell Rapids will be constructing a $1.3 million road from highway 115 to the new development park.  The Governor’s Office of Economic Development and South Dakota Department of Transportation will provide grant assistance.

Governer Daugaard said, “It’s really a double-celebration. We’re here of course to celebrate Ben and his company, Midwest Fresh Logistics, and his decision to come to Dell Rapids.  That’s a great thing for the property tax-base for the city.  It’s a great thing for those who are looking for jobs closer to home that might be commuting to Sioux Falls now or elsewhere and find good jobs right here in the community.  That’s a good thing to celebrate in itself. But what’s great about it is it comes at a time when it provides an opportunity to open up a development park in the city.”

Every speaker thanked the Fiegen family for the land that is being used for the development park.

“I would like to thank the Fiegen family.  The development corporation was able to purchase some land from them.  Without that this project would never have taken place,” said Hainje. 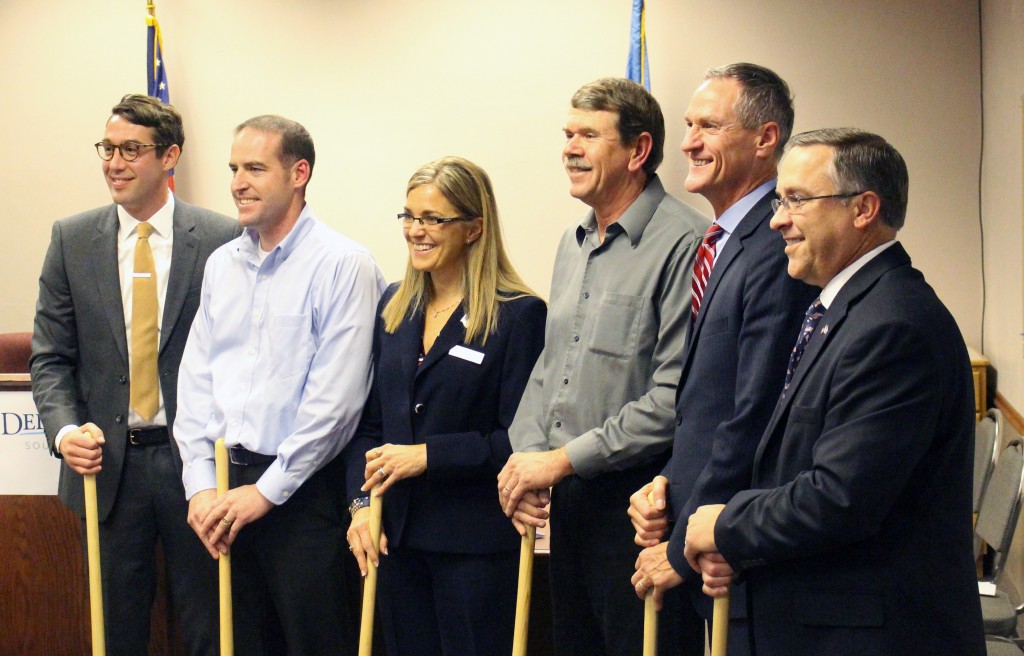