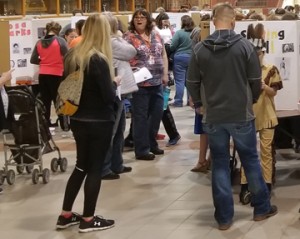 The Dell Rapids School Board recognized the Dell Rapids fifth grade students and teachers for the work that they did at the Living History Fair on Friday, March 23rd.  Ms. Eggers,  Ms. Gruneich, Joshua Fletcher, Mylie Anderson, and Gavin Benson attended the school board meeting on Monday, May 14th to represent the fifth grade class.

The students were given an historical figure to portray during the event.  They researched their person putting together a report, creating a costume, and creating a visual board about their historical figure.  The student had coin cans at their stations, and when visitors put coins in the jars, the students “came to life” and acted out their report about the life of the person they were portraying.

“That’s awesome.  Thanks for doing that.  We just wanted to recognize your hard work and thank you for doing it,” said School Board President Matthew Weiland

Students were given an historical figure to portray during the event.  They spent the last few weeks researching their person, putting together a report, creating a costume, and putting together a visual board about their person.  The students then held “performances” two different times during the day of their event. The first session was held from 9:00 – 10:00 a.m., and the second session was held from 3:30 – 4:30 p.m.

Students had coin cans at their station. When visitors put coins in the jar, the students “came to life” and acted out their report about the life of the person they were portraying. The students will be donating all the money raised during the event to a charity of their choosing.

Students had coin cans at their station.  When visitors put coins in the jar, the students “came to life” and read a report about the life of the person they were portraying.  The students were able to raise $833.77 during the event.   All the money raised was donated to a charity  that the students picked.  The donation this year went to JDRF, which is a foundation for juvenile diabetes.

This was the fifth year the Dell Rapids fifth graders have done the Living History Fair.

The annual Dell Rapids Public 5th grade “Living History Fair” will be held on Wednesday, March 4th, from 9:00-10:00 a.m. and again from 3:30-4:30 p.m.  The 5th grade classes invite everyone to join in the celebration of their hard work, time and effort preparing for this event.

Students will have visual boards and will be dressed in costume.  Donating coins into the students collection jar will bring them to life as they share a little piece of history and how their historical person impacted American history.  All of the money collected by the 5th grade students in their jars will be donated to a charity of the student’s choosing, which will be decided upon at a later time.

The event will be held in the Dell Rapids Middle School commons area.

During the month of March, the Dell Rapids 5th grade class held a Living History Fair in the Middle School Commons.  The students spent several weeks researching information on their selected person from history, wrote a report, put together a poster board of facts, and then brought that person to life by dressing up as their selected person.  The students were asked to stand as wax statues until a donation was made to their jar.  Friends and family made donations at each students area, and the donation brought the students “to life”.

The 5th grade class raised $790.96 during their Living History Fair.  The students then decided on a charity in which to donate the money raised.