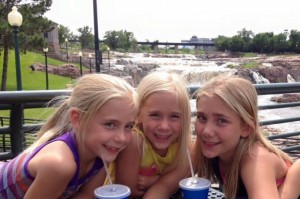 A GoFundMe account has been set up for Malory, Madelyn, and Mariana Krempges who were all involved in Monday’s accident.

The oldest daughter, Mallory, age 11, has a lot of bruising and a punctured spleen. The younger girls, 7 year-old-twins Madelyn and Mariana, were in the back seat and were hurt much worse. Madelyn is upgraded to stable but still on a ventilator. Mariana passed away on Tuesday evening.

Donations can be made at http://www.gofundme.com/zed57jd5

An account has also been set up at Wells Fargo for Malory, Madelyn, and Mariana.  Donations can also be made at any Wells Fargo to the “Christina Rave Donation Account”.

FLANDREAU, S.D. – An adult and a juvenile were killed Monday morning in a two-vehicle crash that occurred southeast of Flandreau.

Besides the two fatalities in the Toyota Camry, three other passengers were injured. Malory Krempges, Madelyn Krempges, and Mariana Krempges all suffered life threatening injuries. They were transported to a Sioux Falls hospital. All are from Dell Rapids.

Eikmeier sustained minor injuries. He was treated and released from a Pipestone, MN hospital.

No charges are pending. The investigation continues.

The Highway Patrol is part of the South Dakota Department of Public Safety.