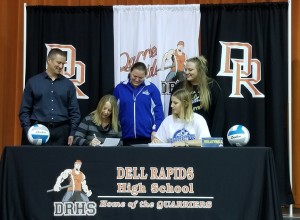 Coach Ahlers had this to say about Fletcher, “Hannah has been an amazing athlete to watch grow over the past four years and is very deserving of this accomplishment. She truly loves the game of volleyball and is constantly trying to perfect her skill. Her leadership abilities not only make her a great setter, but a captain for the whole team to look up to. I am certain it will be a smooth transition into the collegiate playing level for Hannah, and Dakota State University is very lucky to have such a great setter headed their way.”

Veenhoff said that she is very excited to have Fletcher join the Trojan volleyball team next fall.  “She’s going to be a great addition to the team.  She’s a great person and student, and she has a passion for volleyball!  She’s exactly what every coach wants on their team!  She has some good experience being a team leader out on the court and does a good job of running the offense for Dell Rapids.  We are very happy she has decided to continue her volleyball career here at Dakota State!” Veenhoff said.