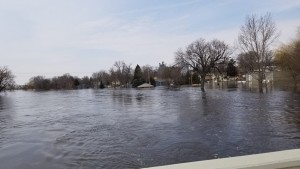 With the City of Dell Rapids having gone through two major floods in 2019 and the prediction of more flooding possible this spring, city staff is already busy making plans to be better prepared if flooding happens again.

Dell Rapids Mayor Tom Earley, City Administrator Justin Weiland, Public Works Director Clarence Fjellanger, and City Finance Officer Claire Baartman recently attended a training in Brandon hosted by the Minnehaha County Emergency Management.  The meeting was held to give a base knowledge and training of Emergency Operation Centers.  Attendees of the meeting also ran through a scenario exercise of how to run an operations facility with different roles.

“You walked away with at least a lot better understanding of when things happen, why they’re happening, and who’s making the decisions.  There is a process in place,” said Mayor Earley during the Dell Rapids City Council’s last meeting on Tuesday, February 18th. “It was really helpful to understand the role, not only the county, but the people who were there from the state as well.”

Along with attending the training, the city is also making other plans in anticipation of more spring flooding.

Weiland reported, “We’re just making sure we have pumps ready to go, our lift stations are capable of handling.  We kind of know what to expect from the waste water treatment facility and type of things we need to be prepared for when the water starts coming in.”

Other plans include making sure utilities in the flood prone homes are secure from sewer infiltration.  Staff is also putting together cost estimates to replace fencing, fix damaged electric, repairs to various facilities, as well as calculating time for cleaning up fields and the campground once the waters recede.  The goal would be to get the parks up and running prior to the summer events.

Less than six months after major flooding in March, the Dell Rapids area was hit worse with flooding starting on September 12th.  Rain totals from two nights of storms on September 10th and 11th ranged from eight to ten inches which led to historic flooding of the Big Sioux River.

The river rose to a record high of 16.72 feet during the evening of Friday, September 13th.  The record level caused major water damage and displaced many families from their homes.

The community of Dell Rapids rose to action for those in need.  Dell Rapids City Administrator Justin Weiland praised numerous people for all their help.  The Dell Rapids City Public Works Department pulled rotating 24 hour shifts to make sure the city’s sewer system didn’t back up into people’s homes, plus they waded through flood waters to save city infrastructure.  Local businesses donated property for anyone who was impacted by the flood to store items, allowed sandbags to be stored and collected from their property, and donated meals.  Volunteer groups were set up to help direct those who were in need of help to get the things that they needed.  Organizations also helped to provide hotel rooms for those in need, and local fundraisers have also been held for those affected by the flood.

River levels have started to drop in the last week.  As of Wednesday, September 18th, the Big Sioux River level was at 14.5 feet.  The river is predicted to continue to drop to near the 13-foot mark by Monday, September 23rd.  As the waters recede, expectations are more damage may be revealed that is yet unknown.

Property owners and tenants affected by the two floods this year have asked the city if anything could be done during the council’s regular meeting on Monday, September 16th.  They noted that some cities, such as Sioux Falls, have purchased properties prone to flooding.  However, the city mentioned during the meeting that the City of Dell Rapids does not have the income to do something like that.  Administration did mention that they would continue to research different options that might be available and communicate findings to the property owners.  Meanwhile, members of the council said that they would do what they could legally do as a city entity to help those in need and give them guidance on how to move forward with any restoration or construction work on the homes in the future. 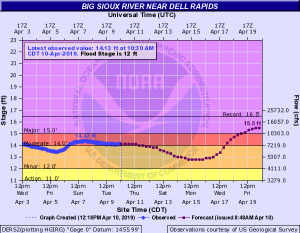 The City of Dell Rapids may not have seen the last of the flooding issues this spring.  The National Weather Service’s Advanced Hydrologic Prediction Service website is predicting the river to rise above 15′ again by Thursday, April 18th and potentially reach a level of 15.5′ by Saturday, April 20th.

Weeks ago the prediction service had predicted the river to potentially be down to 12′ by Friday, April 5th, but the Big Sioux River only dropped to just under 13.5′ by that time.  The current prediction is indicating the river to stay close to the 14′ mark through Friday, but then drop to about 13′ by early next week.  This appears to be just a lull before the river again rises by mid-to-late next week.  Dell Rapids saw the Big Sioux River reach the high point of 15.98′ on Sunday, March 24th.  The current prediction shows the level to stay under that high point as of now.

About 25 properties have been impacted by the flood waters by the river according to City Administrator Justin Weiland in a report he gave to KELO TV.  The community has come together over the last couple of weeks putting together sandbags, helping place those sandbags, and help property owners move possessions in hopes of minimizing the damage from the flood.

The question now is how long the flood waters will remain at the current level.  The National Weather Service’s prediction shows the river should remain at about 15.8 feet throughout the remainder of the week.  Flood waters should start to recede about Monday, April 1st with the water level dropping to just over 12 feet by Friday, April 5th.  Outlooks could change, though, with more snow that has yet to melt in northern South Dakota.  According to Jason Gearman of the Minnehaha County Emergency Management the weather forecast has really helped keep the levels below what was predicted for the flooding weeks ago.  With the flood waters predicted to stay in the “major flood” stage for another week, it will still take some time to survey all the damage caused by the flood.

You can monitor the National Weather Service’s water level predictions for the Big Sioux River by clicking this link. 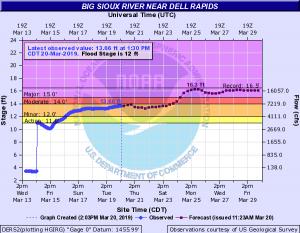 The National Weather Service is predicting the Big Sioux River in Dell Rapids will reach near record flood levels by Monday, March 25th and stay near that level throughout much of next week, and citizens are proactively working to limit the damage as much as possible.  The NWS predicts the Big Sioux River will hit 16.3 feet, which is just shy of the 16.5 foot recorded record.  Flood stage is at 12.0 feet.  The current level of the river is at 13.66 feet.

The City of Dell Rapids has been in coordination with the Emergency Management staff at Minnehaha County.  A 24-hour sandbagging site is now open at the Dell Rapids City maintenance shop located at 24680 475th Ave.  Sandbags, shovel, and sand is available at the site and will be open 24 hours per day, seven days a week.  Residents are urged to be prepared to fill their own sandbags, however, there are efforts to get volunteers to help fill the bags.

If you would like to help volunteer to help fill sandbags, please visit the Dell Rapids Flood Relief and Preparation Facebook group to get more details on how to help, https://www.facebook.com/groups/2005215246440744/