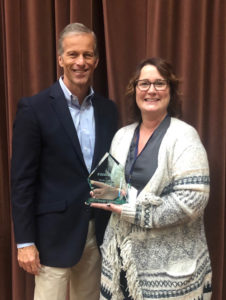 This award is presented to one person each year.  The award rotates between a municipal employee and elected officials every other year.  The award is given to those that have made outstanding contributions to the betterment of municipal government.

In the letter Earley says, “Diane supports the many activities and programs that enhance life in Dell Rapids.  Diane has been active in almost every aspect of the Dell Rapids community.”

Earley also said, “Diane’s knowledge and experience is sought out by her peers at many city hall in South Dakota.  Her attendance at training provided by the Municipal League has enabled Diane to know and understand the issues and problems other towns deal with on a daily basis.  Her experience has helped other communities in their search for a solution to a particular issue.  Most important, the image and credibility of local government is enhanced and strengthened by her commitment to Dell Rapids.  Over her 20 years, Diane had created and fostered a positive image of city hall, the City of Dell Rapids, and all those who get to know her.  She is always willing to go above and beyond in every aspect of her life.”