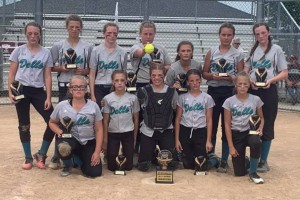 The Dell Rapids DeKalb 12U team took home the state title going undefeated all weekend and only allowing six total runs.  They won their opening game on Friday afternoon over Siouxland Fastpitch by a score of 14-2.  They followed that win with another win on Friday over Lennox by a score of 13-0.  Dell Rapids continued to roll on Saturday with a win over Tyndall 11-2 and a win over SWAT 6-2.  SWAT battled back to get another chance at Dell Rapids, but Dell Rapids blanked SWAT 3-0 for the championship.

Head coach Jenny Alderson said, “These girls played their hearts out! They are only going to get stronger as the years go by.  The Dells program has made the players who they are today, and I would like to thank the parents and the community for the opportunity to be a part of a wonderful program.   Also I would like to thank our sponsors Casey Scheidt from Dekalb and Seth Van’t Hof from Taxidermy & Nutrient for helping the girls.” 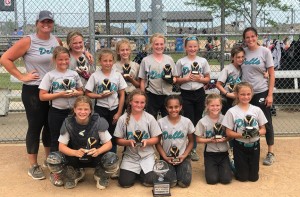 The Dell Rapids 10U team placed second in their state tournament after a tremendous battle through the loser’s bracket.  Dell Rapids lost their opening game of the tournament to Dakota Valley 12-11.  They then had to play six games just to reach the championship game.  Dell Rapids marched through the bottom half of the bracket beating Extream U10 11-8, Post 22 U10 11-10, Spearfish Toxic 8-3, Strom 15-3, Liberty Sluggers 17-1, and the Freeman Flycats 8-5.  That put Dell Rapids in the championship game against the Road Runners from Mitchell, but the Road Runners ended the Dell Rapids run with a 9-1 victory. 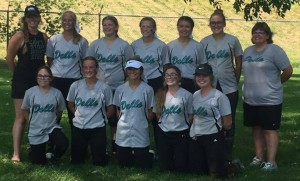 The Dell Rapids Ace Hardware 18U also played their state tournament in Sioux Falls.  They finished with a 2-2 record and a fifth place finish.  Dell Rapids lost to Winner Purple 13-1, defeated Sioux Falls Inferno 9-7 and the Clearfield Sandburs 7-5, but lost to the Venom 12-9 to end their tournament.

As the school year comes to a close, the summer ball season has begun.  After weeks of trying to battle snow storms and wet fields, the youth baseball and softball teams have begun playing games and fans can be heard cheering for their teams every night on the Dell Rapids ball fields.

One new feature has been added to one of the youth fields for this summer.  Eagle Scout Jack Prasek put together a manual scoreboard and installed it on Field F for the Dell Rapids Baseball and Softball leagues as part of his Eagle Scout project.  The new scoreboard has been a great addition to the field.

Diamonds will be full of baseball games and softball games almost every night of the week through the early part of July.  Head down to the fields and catch some exciting games all summer long! 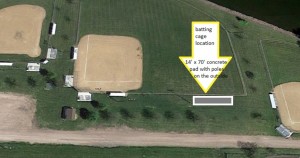 A new batting cage will be constructed next to Field E in Dell Rapids after the city council gave its approval.  The Dell Rapids City Council approved the request by the Dell Rapids Baseball Association during the regular meeting on Monday, February 5th.

“As you guys are probably aware, our numbers keep increasing, increasing, increasing, and we have one batting cage right now and that’s up by Rickeman Field.  So really, the youth fields don’t have any batting cages.  We would like to put a cage to start with, one single cage, down the right field line of Field E,” said Dell Rapids Baseball Association board member Jeff Holm.  Holm presented the project during the council meeting.

The Dell Rapids Baseball Association has been in contact with local companies and contractors to provide the materials for the project.  The goal is to try to get most of the materials and work volunteered or at cost to keep the price of the project as low as possible.  The baseball and softball associations did not request any city funding for the project.  Any costs associated with this project will be paid by the Dell Rapids Baseball Association.

The 14U/16U Dell Rapids Ace Hardware softball team placed second in the Interlakes Youth Softball Association tournament held July 18th through July 20th.  On Tuesday, July 18th, Ace Hardware defeated Volga 13-1 and Watertown 7-6.  On Wednesday, July 19th, Ace Hardware lost to Madison Rage in the semi-finals of the tournament.  They then went on to defeat Brookings in the loser bracket 14-0 to make it to the championship game.  The championship game was played on Thursday, July 20th.  Ace Hardware was defeated by Madison Rage 5-7 for a second place over all finish. 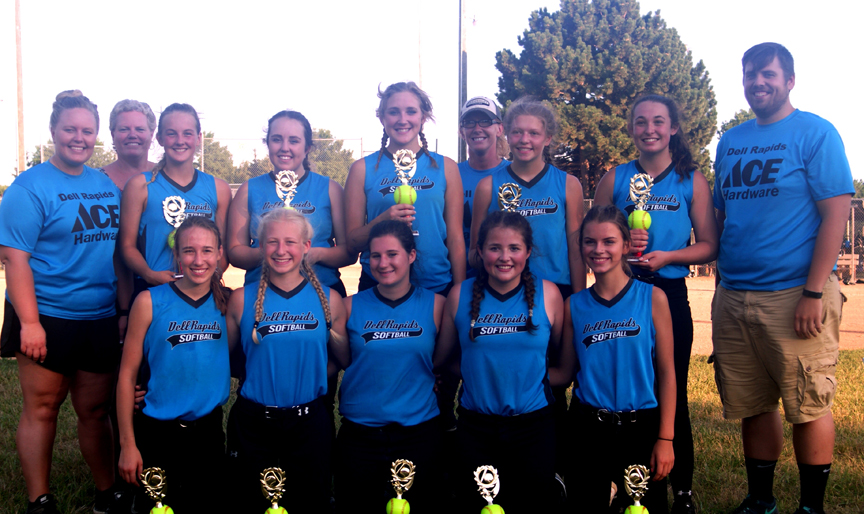 ​​The Dell Rapids 10U softball team took third place in the C division at the State Softball Tournament held in Sioux Falls Friday, July 14th, through Sunday, July 16th.  There were a total of 17 teams that played in the C division. 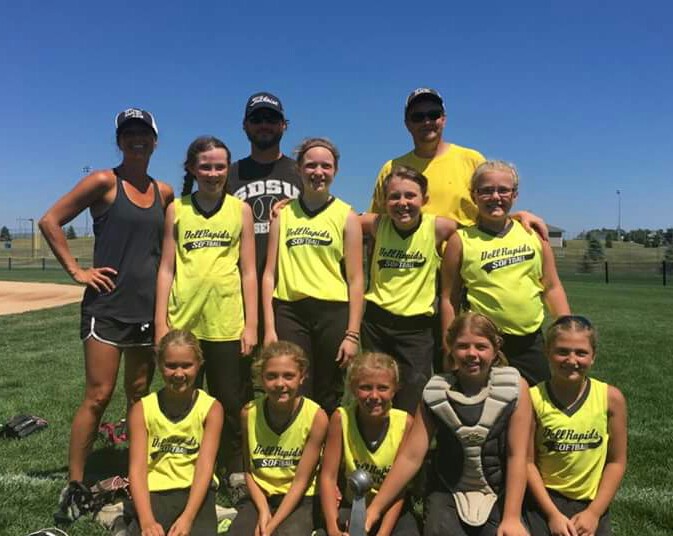 Growing up in a small town is quite often taken for granted!   As young children we grow up thinking how annoying it is that our parents know everyone, and everyone knows who we are, but as we get older, we realize how wonderful our small town is.  This really hit home this past year for a group of softball players I coach.  We participated in a tournament in Brookings where two younger Dell Rapids teams were also playing.  As my team played their first game on Sunday, all the girls noticed the younger Dells teams watching them play!  The younger girls were cheering for them, and knew most of their names.  My players, seeing all the young talent and excitement for softball, decided they wanted to do something to give back to these young players.   We decided to team up with the Daily Bread Food Panty and help their “still new” Back to School Program!  Last year, they supplied 51 local kids with all the school supplies they needed.  The girls feel this is a great cause and would like to help!

A softball clinic will be held Tuesday, July 25th, with registration beginning at 6:00 pm and clinic from 6:30-8:00 pm.  The clinic is for all girls who play softball from U6-U12 age groups.  It will be held on Fields A and B at Dell Rapids City Park.  The “cost” for the clinic is two donations to the Daily Bread Food Pantry’s Back to School Program.  Feel free to donate anything on the school supply list for all ages! 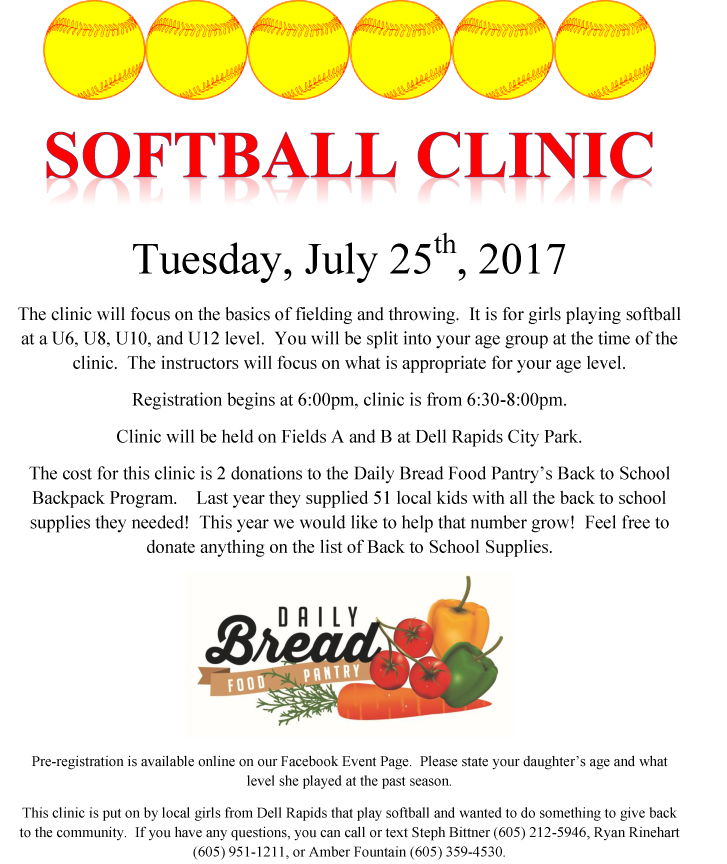 The weekend of July 7th, Sioux Empire Fast Pitch Softball Association held their annual league tournament. The girls played through a long, hot weekend, and Dell Rapids took 2nd place in the U14 division. Kylie Bittner led Dell Rapids with 24 strikeouts in 12 innings of pitching.  Autumn Tomes added five strikeouts in four innings of work.  The top batting averages for the weekend were Kylie Bittner with .750, Kenzie Garry with .727, Haileigh Barnhart with .636, Makayla Duinkerken with .538, and Cara Rice, Leigh Lacey, and Audi Uriqujo with .545. 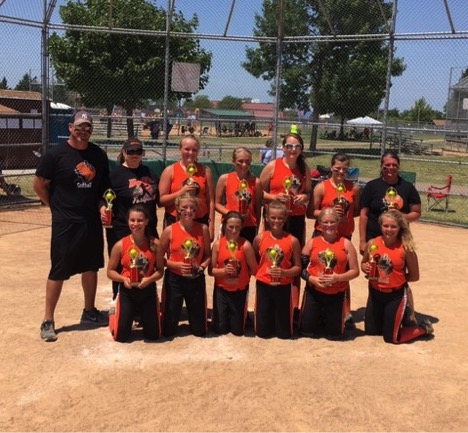 On Sunday, June 25th, the Dell Rapids 14U softball team traveled to Lake Benton for the 7th Annual Tony Tournament.  The tournament for U14 was set up as a true round robin tournament.  Dell Rapids played a series of three games.  The tournament was compiled of wins, losses, and points scored.   At the end of the rainy day, Dell Rapids took first place!  Kylie Bittner lead the team in pitching with 17 strikeouts and only one walk in the tournament.  Top batting averages were Makayla Duinkerken and Bittner with an .833 average.  Kenize Garry, Cora Alderson, and Autumn Tomes all had an .800 average, and Leigha Lacey finished with a .667 batting average. Tony Awards were given to one girl each game for the following:  Garry for her outstanding skills at 1st base, Autumn Tomes for her two triples she hit in one game, and Lacey for some great plays she made playing catcher. 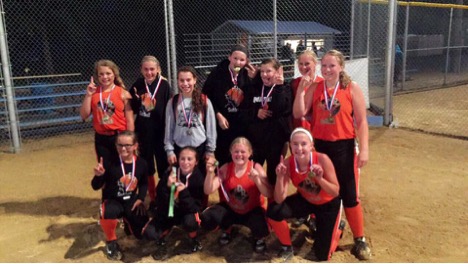 The past two weekends have been very busy for the U14 DR Quarriers softball team. They played in the Denny Sanford Memorial Day Tournament the weekend of June 2nd in Sioux Falls, and took 2nd place! They also played in the Brookings Softball Tournament on June 9th weekend and took 2nd place. Kylie Bittner led the team with pitching a total of 370 pitches over the weekends. She pitched a total of 288 stikes, and 82 balls; she struck out 25 batters and walked six. The MVP’s picked by the opposing teams were Kylie Bittner (for her pitching), Haileigh Barnhart (for her amazing diving catch in left field), and Leigha Lacey (for her outstanding catcher abilities) in the Denny Sanford Tourney. The MVP’s from the Brookings tournament were Cara Rice (for her awesome team spirit), Leigha Lacey (for her hustle at catcher), Kenzie Garry (for her long stride at 1st base), Autumn Tomes (for her glove playing 3rd base), and Kylie Bittner (for her pitching).

The DR Quarriers bats were on fire these weekends! The leaders were Kenzie Garry and Kylie Bittner with a .818 batting average on the weekends. Leigha Lacey, Autum Tomes, and Cora Alderson had a .727 batting averages; Cara Rice had a .636 batting average! 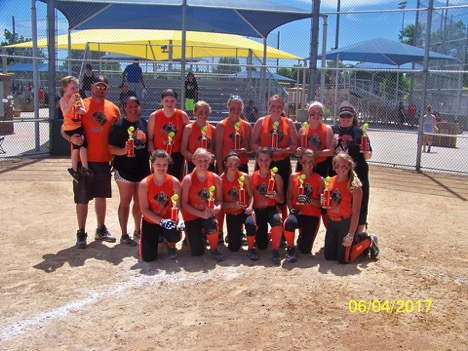 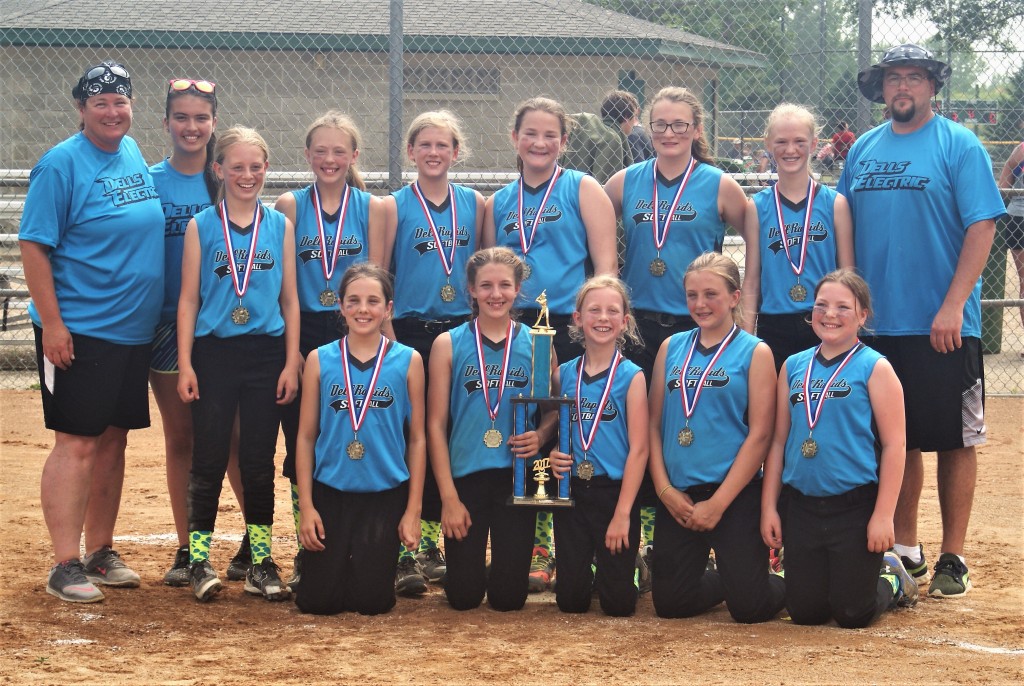