In the battle of the Cardinal, Arlington beat Dell Rapids St Mary 58-6 on Friday, October 12th in Arlington.  Arlington scored 20 seconds into the game and never looked back in the victory.  Arlington scored 30 points in the first quarter, 22 points in the second quarter, and the game-ending touchdown about mid-way through the third quarter as the game ended on the mercy rule.  Dell Rapids St Mary scored their lone touchdown in the second quarter on a run by Ben Bunkers.

Dell Rapids St Mary picked up 157 rushing yards and 28 passing yards for a total of 185 yards of offense.  Josh Brown carried 11 times for 89 yards.  Bunkers had eight carries for 46 yards.  Bunkers was also one of six passing for 13 yards and one interception.  Wes Heinricy was two of two for 15 yards.  Noah Fiegen and two catches for 21 yards.  Noel Hansen had four tackles to lead the defense.  Jonah Longville added 3.5 tackles.  Brown had a forced fumble and fumble recovery.

Head coach Ross Flemmer said, “Arlington is a very good team.  We had trouble with turnovers and that took away some opportunities to keep the game closer.”

The Dell Rapids St Mary Cardinals defeated the Colman-Egan Hawks 36-30 in overtime on Friday, September 21st.  The Cardinals used a running attack as they ran for 314 yards.  They added 104 passing yards for a total of 422 yards of offense.  Colman-Egan had 206 yards of rushing along with 42 passing yards for a total of 248 yards of offense.  Noel Hansen led the Cardinal offense with 27 carries for 142 yards and a touchdown.  Ben Bunkers had 19 carries for 134 yards and three touchdowns.  Wes Heinricy was 4-9 passing for 108 yards, two touchdowns and one interception.  Josh Brown had a 60-yard touchdown catch in the game, and Jared Scholten had a 10-yard touchdown catch.  Leon Maxwell led the defense with seven tackles, three sacks, and a fumble recovery.  Brown added seven tackles, one sack, and had an interception.  Heinricy had 6.5 tackles, and Bunkers had five tackles.

Head Coach Ross Flemmer said, “The kids played with a lot of heart, they continued to battle adversity and kept coming back.  Our offensive and defensive lines comprised of  Leon Maxwell, Jonah Longville and Jared Scholten, Jacob Frost, and Noah Fiegen played a great game, they opened holes for our running backs all night and they dominated the defensive line and brought pressure on Colman-Egans Quarterback.  We had a lot of kids make big plays throughout the game and they all did a great job.”

The win improves the Cardinal record to 3-1 on the year.  Dell Rapids St Mary will take on Deubrook Friday, September 28th, for homecoming at 7:00 p.m.

The Dell Rapids St Mary Cardinals put up 44 points in the first quarter on their way to a 56-12 win over the Oldham-Ramona/Rutland Raiders on Friday, September 14th, at Rickeman Field.

The Cardinals opened up the game with a kick-off return for a touchdown by Ben Bunkers.  The 2-point conversion was good, and Dell Rapids St. Mary lead 8-0 13 seconds into the game.  O-R-R responded with a touchdown run of their own 40 seconds later to close the gap to 8-6, but that was as close as the Raiders would get the rest of the game.  Noel Hansen added a rushing touchdown about the 7:30 mark of the first quarter to put the Cardinals up 14-6.  About a 1:30 later, Wes Heinricy connected with Bunkers on a TD-pass, and with another successful 2-point conversion, the Cardinals led 22-6.  The Cardinal defense would add a touchdown about a minute later when Jonah Longville took the ball away from Dustin Riedel in the endzone for a touchdown.  At the 3:34 mark still in the first quarter, Jacob Glazier put the ball in the endzone on a 3-yard touchdown run.  The defense would add one last touchdown in the first quarter when Jared Scholten stripped the ball and ran it back for a touchdown.  Dell Rapids St. Mary led 44-6 at the end of the first quarter.

The Cardinal defense would get their third touchdown of the night when Josh Brown returned a fumble at the 6:35 mark in the second quarter.  Dell Rapids St. Mary took a halftime lead of 50-6.  Oldham-Ramona/Rutland would score the only touchdown of the third quarter for either team on a break-away run by Riedel.  Casey Hansen would get the final touchdown for the Cardinals on a QB-run with about 2:00 left in the game.

Head Coach Flemmer said, “I thought we did a much better job of tackling this week.  Our offensive line improved and we were able to run the ball much better.  We still have a lot of work to do to get ready for Colman-Egan, but we are headed in the right direction.  The kids played hard tonight and had fun.”

The win moves the Cardinals to 2-1 on the year.  They will travel to Colman to take on Colman-Egan on Friday, September 21st.

The Castlewood Warriors, ranked 3rd in 9B, defeated the Dell Rapids St Mary Cardinals 58-6 Friday, September 7th in Castlewood.  The Warriors racked up 218 yards of rushing and 136 passing yards for a total of 354 yards.  The Cardinals were only able to 105 yards of rushing and four yards of passing for a total of 109 yards of offense.  Noel Hansen had eight carries for 65 yards to lead the Cardinals.  Jared Scholten led the defense with 7.5 tackles on the game.

Head Coach Ross Flemmer said, “Castlewood is a good team.  However, we are capable of playing much better football.  We underperformed in every aspect of the game. We will need to work hard this week and improve greatly if we want to pick up a win this Friday night.”

Dell Rapids St Mary falls to 1-1 on the year.  They will host Oldham-Ramona/Rutland Friday, September 14th, at 7:00 p.m. at Rickeman Field.  The game will be webcast starting about 6:50 p.m. on Big Sioux Media. 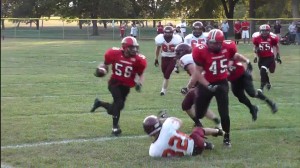 Jared Scholten running in for touchdown in 1st quarter.

The St Mary Cardinals out of Dell Rapids ignited the hometown crowd with a 34-28 win over DeSmet/Iroquois Friday night in their opening game of the 2012 season…a game that was streamed live on Big Sioux Media.com.   The Cardinals jumped out to a 6-0 lead at the end of the first quarter following a Wes Heinricy pass to Jared Scholten for a touchdown.

Josh Brown on his way to a touchdown in 2nd quarter.

Then at the start of the 2nd quarter, Josh Brown broke left and scored their 2nd TD of the game with the 2-point conversion good.  St Mary then allowed the visitors to get their only touchdown of the first half.  But before intermission St Mary once again added two more score.  Brown and Scholten both found their way into the end zone before halftime.  St Mary led at halftime, 26-8.  The Eagles though roared back in the 2nd half scoring twice and trailed only by 4 points with just over 2-minutes to play.

The Eagles then took the lead, 28-26 with 2:04 showing on the clock in the 4th quarter.  St Mary worked the ball down the field, and scored what appeared to be the go ahead touchdown, but a holding call negated the touchdown, so they lined it up again. On 4th down Heinricy found Noel Hanson in the end zone putting the Cardinals up 34-28 with :26 seconds remaining. 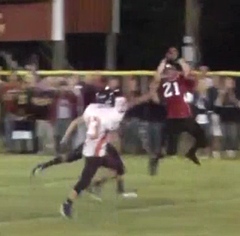 DeSmet/Iroquois took the ball down the field and with :06 seconds left and put themselves in position to tie the game.  Their first attempt to tie the game up was knocked away and left :01 still on the clock.  The final pass play by the Eagles was incomplete, and the Cardinals won their first game of the year.